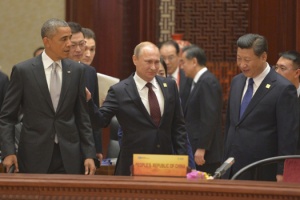 Reposted from Asian Age May 15, 2015 http://www.asianage.com/columnists/modi-s-trilemma-1

India’s bland foreign policy has traditionally been based on the principle of “please all and offend none”. Things changed under Indira Gandhi when we pivoted to the Soviets and teamed up against the “capitalists” in the West. But post-1990, once the Soviet dream evaporated, we reverted to the “offend none” tactic. The UPA years were a continuation of this approach, which suited the soft-spoken, nominal Prime Minister Manmohan Singh.

Things have changed since then. Prime Minister Narendra Modi is a muscular, energetic man and wants his foreign policy to reflect that energy and purpose. But he faces the classic problem of managing an “impossible trinity” comprising the US, a weakening Russia and an emerging China, which today attracts allegiance from countries cutting across traditional power blocs.

East Asia, other than Vietnam and Australia, feeds off China’s economic growth. China will likely add $6 trillion of new wealth (GDP increase over 2015) in the period 2015-24 and this is a powerful magnet that dulls the pain of negotiating with China over “disputed territory” in the South and East China Sea.

Similarly, Sub-Saharan Africa increasingly depends on Chinese investment “aid” and mineral export to China. Even Russia prefers to diversify its energy exports away from Europe to China, but not to India or Japan.

China is an immediate neighbour of India. A dispute over border demarcation in the west and east lingers. Neither party is really willing to resolve it because it is convenient for both.

For China, the ongoing border dispute presents it with the opportunity to build roads through Pakistan-occupied Kashmir (PoK), linking into Karachi on the Arabian Sea and the still-to-be-built Chinese port of Gwadar in Balochistan province, next to the Iranian border.

For India, the border dispute and China’s dodgy moves to build infrastructure through PoK, with the concurrence of Pakistan, is a package problem. It serves to legitimise a tit-for-tat aggressive development of Arunachal Pradesh, a border territory claimed by China. The area has significant hydro potential estimated at around 30 GW and is of strategic importance to safeguard the north-eastern states of India to its south.

It is fashionable to couch India’s need for China in commercial terms — trade and investment. But China is a much more efficient manufacturer than India and hence a trade deficit ($40 billion doubling to $80 billion in three years) is inevitable, with India as the junior exporting partner. Seeking investment from China is one way of plugging the hole created by the trade deficit. But such investment benefits China as much as India.

India’s growth story, whilst not as impressive as China’s, is sufficiently dramatic in these economically hollow times to garner eyeballs. New value creation (cumulative value addition to GDP over 2014 levels) of $1.4 trillion over a decade from now is not a trifle. A share of just 20 per cent (similar to its share today) in India’s new value creation could feed an annual growth of 0.3 per cent for China.

Growing economic ties with India — soon to be the fourth largest economy in the world (after the US, China and Japan) — enhance China’s “strategic prestige”. This is the “pull” factor. There is also a “push factor” which Indian strategists tend to emphasise — China’s paranoia that India may become part of a US effort to encircle China along with Japan. This “fear factor” is over hyped.

China knows well that the Indian psyche favours reconciliation rather than confrontation. India routinely prefers turning a Nelson’s eye to occasional intransigence but abhors subjugating its sovereignty to any foreign influence — a hangover of our colonial mindset. India could never be a link in an American chain to “contain” China.

China is unconcerned about future competition from the US. Over the next 30 years, the US will morph demographically into being dominated by fast-growing Hispanic and African-American communities; an ageing, minority white population; the inherited disadvantage of high wages and even higher citizen expectations; degrading infrastructure and increasing inequality. What this will mean for the “can do” spirit and mojo which defines the US, is unclear.

Despite such uncertainties, the US remains a long-term natural ally of India. Its plural culture, democratic values, federal institutional arrangements, history of innovation and grounded belief in religion and “family first” gels well with India.

A weakening US and a strengthening India make a perfect combination. The combined GDP of the US, India and Japan will be double of China’s GDP in 2024 and their future value addition — a key “convening” factor for attracting allies — will be higher than that of China.

Finally, the significant Indian community and private sector investment in the US and Europe provide a ready base for developing P2P (people to people) and B2B (business to business) contacts.

All this is reflected in the determined efforts of Mr Modi to establish a trade, investment and communication bridgehead with the US, Japan, Germany and Australia.

The traditional third leg of the impossible trinity has been Russia. But the gains from trade or strategic alignment are scarce. A close strategic friendship with Russia elicits no apprehension in Beijing because Russia is today a “toothless bear” plagued by a natural resource-export dependent economy. Russia, ruled by “grasping” oligarchs, has to reform and shed its macho image. Its best bet is to integrate into Europe, where it belongs. Consequently the “real” third leg of the trinity in future is Europe, with Germany and Russia as possible focal points.

Mr Modi’s strategy to navigate the impossible trinity of US, China and Europe-Russia is clear. Engage with the US, Japan and Germany aggressively and integrate into their value chains. Keep expectations low but exchange lofty targets with the Chinese and the Russians. But, most importantly, keep your powder dry and gear up India’s economy, because our best friend is our own strength and resilience.