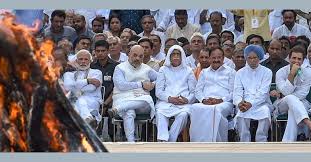 No one knows why Prime Minister Modi chose to walk behind Atal Bihari Vajpayee ji’s funeral cortege till “Smriti Sthal” (the place of remembrances), where India’s top politicians – are usually cremated. Was it to bridge the gap between his actions and the principle of Raj Dharma (ethical rule) enunciated by Atalji in 2002? Was he pre-empting possible attempts by the Congress or the Janata Dal, to appropriate for themselves, the legislative and executive legacy of Atalji – the gentle giant? Or was it merely to hog free public facetime on national TV? 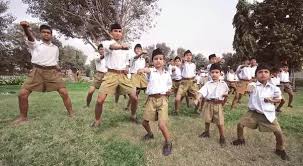 Truth be told, it matters little. What does matter is the impact the extended visual had, of senior BJP leaders trudging on doggedly, through the muggy heat, for 5 long kilometres and seeming none the worse at the end – including the mildly podgy BJP President, Amit Shah. There could be no better illustration of the core RSS ideology of “character building” – training the body through renunciation to execute plans thought up by a selfless mind.

Walter Anderson & Shridhar Damle, the authors of “The Brotherhood in Saffron: The Rashtriya Swayamsevak Sangh and Hindu Revivalism”, 1987 did a comprehensive review and ideology of the RSS at a time when the Sangh dominated the BJP.

The BJP demerged from the Janata Party in 1980. It won its first state level general election with a clear majority, only a decade later, in 1990 in Himachal Pradesh and Madhya Pradesh, quickly followed by Uttar Pradesh in 1991 and Rajasthan in 1993. At the national level its seats in the Lok Sabha increased from just 2 in 1987 to 120 in 1991 – far from a majority but it was the second largest party behind the Congress.

Its spectacular success was partly sparked by a tactical error by Rajiv Gandhi, as Prime Minister, in stoking a Hindu backlash by intervening legislatively in 1986, to reverse the progressive judgement of the Supreme Court in 1985 under Justice Y.V. Chandrachud, which had upheld the High Court ruling, allowing maintenance to Shahbano – a divorced, Muslim woman, under the provisions of the Criminal Procedure Code, 1973, even though her suit was not maintainable under Muslim Personal Law.

To assuage the consequential Hindu backlash against, what was perceived as “appeasement” of Muslim sentiment, the Rajiv Gandhi government opened the locks of the Babri Masjid in Ayodhya to allow access to the Hindu idols inside.   L.K. Advani launched his Rath Yatra for completing what Rajiv Gandhi had begun – building a Ram Temple, which led to the 1992 illegal demolition of the Babri Masjid by Hindu fundamentalists, even as the Government of Uttar Pradesh – then under the BJP and the Union government, under Prime Minister P. V. Narasimha Rao, turned a Nelsons eye to the proceedings. 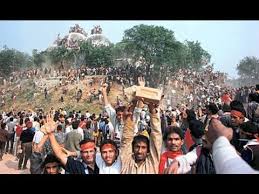 More importantly it legitimated, in Hindu minds, the fundamental RSS opinion that unless Hindus presented a united front, democratic processes would result in a dilution of the Hindu voice in governance of the nation.

Anderson and Damle have now updated their 1987 work and covered the developments within the RSS and its affiliates in a new book –“RSS- A View to the Inside”. It is a great place to start understanding the relationship between the RSS and the BJP.

Post 2012 shift in power balance from RSS to the BJP

The balance of power between the BJP and the RSS has turned since 1987. Of the over 100 affiliates (36 are listed in the book), BJP is the most significant. With a majority in the Lok Sabha and in state governments covering two thirds of India’s population, the BJP is a dominant national player and a significant voice within the Parivar (family) presided over by the RSS.

The RSS has also grown, particularly post 1990.  Nearly 2 million people are said to participate in more than 60,000 Shakhas (primary groups) which meet daily, weekly or monthly. The elite cadre of the RSS consists of 6000 Pracharaks (communicators). These can be functionally likened to the Weberian “steel frame” of the Union government. Unlike them, Pracharaks are unpaid full-time workers, whose meagre, monkish, needs are reimbursed. One half of them are on deputation to affiliates including the BJP – many of whose top leaders (like L.K. Advani and Narendra Modi) were Pracharaks. Significantly, Shah is not one of them, though he is a dedicated swayamsevak (selfless-worker).

Can the RSS be insulated from the compulsions of democratic success

If the BJP is re-elected to power in 2019 for the first time there would have been a decade of BJP political rule. Will this create tensions within the RSS, which remains resolute to its core ideology of nationalism, “character building”, evangelical (as in non-threatening) Hindutva and a belief in its higher moral purpose above mere politics? But this is not a red line. Its cadres actively pushed the BJP to power in the 2014 general elections. A similar strategy seems likely in 2019. 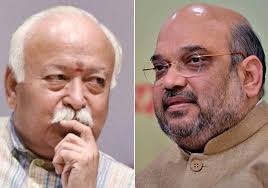 The more the RSS grapples directly with the politics of evangelical Hindutva the less would be its traction with its affiliates, like the Hindu Vishwa Parishad, which practise a fundamentalist form of Hindutva. The enormous addition in the resources available, which comes with political power in India, will enable the BJP to exercise overwhelming financial dominance over the other affiliates. Would the RSS, till now an umbrella organisation, the centrepiece of the “Parivar” retain its pre-eminence? Could it assimilate a “rainbow” of castes, regions and cultures – all of them products of modern India – into its spiritual view of Hindu culture?

Is there a possibility that a decade of BJP rule till 2024 could refocus the polarity around the BJP rather than the RSS, with the umbrella organisation become the cultural affiliate of the BJP?

This is undoubtedly an extreme scenario. First, the RSS is slow to change and prefers wide consensus to top-down decision making. The BJP under Narendra Modi and Amit Shah is the opposite. It moves rapidly and is completely centralised in its decision making. A war of attrition would probably favour the BJP.

Narendra Modi as Sarsangchalak in 2024 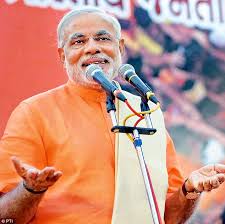 This writer asked Walter Anderson, at his book discussion in the Observer Research Foundation, New Delhi yesterday, if he thought that by 2024 Narendra Modi, would recuse himself from active politics and become the Sarsangchalak – the supreme guide and advisor of the RSS – the position held, since 2009, by Mr Mohan Bhagwat and in doing so, merge the two organisations.

Mr. Anderson’s firm response was “No, a Sarsangchalak is always promoted from within the RSS and they despise politics. Mr. Modi would not want it any other way.” So, there you have it from the expert. Best to take his word for it.