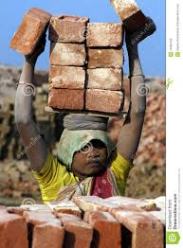 The duality of India’s gender equity environment is pretty extreme. At the very top there is nothing new about upper crust women exercising political power; Ahilyabai Holkar in the 18th century; Begum Hazrat Mahal in the 19th ; Indira Gandhi in the 20th and Sonia Gandhi today. Post-independence, the glass ceiling at the workplace has been progressively bent. It is fairly common now to be flown by a woman pilot; to petition a woman babu for accessing a public service; collaborate and compete with women colleagues or serve on company boards alongside women. Unfortunately there are still not enough women in the “relentlessly tough” professions; police; engineering and surgery.

At the very bottom, the poor have never had the luxury of not being gender neutral in their fight for survival. If the man cannot provide for his family, women take over the burden through self or casual employment, though it is a much harder fight to take control of common assets. Thankfully, better access to micro-finance; targeted work opportunities and the potential for economic migration in a growing economy, no longer makes it necessary for a poor woman to be a Phoolan “Bandit” Devi to survive.

The problem of gender inequity is most acute in the middle class, where upwardly mobile appearances have to be maintained. There are clearly not enough Bhenjis (Mayawati) and Didis (Mamta) around in the political space. Much the same is true for the workplace.

The formal/organized sector is the benchmark for middle class gender bending. It is here that employment is stable; compensation is adequate and working conditions bearable. It is not as if nothing has changed since 1947. Formal employment has increased, albeit marginally, and today is around 29 million or just 5% of total employment. Whilst women have benefited disproportionately, their share in formal employment increased inadequately from a low 15% in 1995 to a miserable 20% today.

Change is happening but if formal employment is to be enlarged for women, the State needs to intervene to make a difference in the next 10 years. Four initiatives are proposed:

First, government must not shy away from the “win-lose” option of pushing employment of women in the formal sector by statute at the expense of men. The private sector which has lower institutional and labour market rigidities, is already responding, on a strictly “value for money” basis to enlarge women employment. Since 1995 the formal private sector added 2.8 million jobs, of which 39% (1.1 million) went to women. Their share has increased from 20% in 1995 to 24% today.

It will hurt men directly but government must reserve 50% of entry level positions for women across the board in the civilian cadres of government, including within the existing quotas for scheduled caste, scheduled tribe, other backward caste, and minorities (a few states). Income based “brownie points” in selection and a “one-time quota benefit, not transferable to children” can serve to churn the ensuing benefit better.

It is shameful that our leaders have been the most regressive. The 15th Lok Sabha was unable to agree on a quota of 30% for women in politics because of opposition from backward caste based parties, who continue to be male dominated. One hopes that the emerging “chatur-murti” of Amma, Bhenji, Didi and Sonia with a possible 170 votes between them, aided by the left’s indefatigable Brinda Karat shall bring this to fruition in the 15th Lok Sabha.

Second, continuing female infanticide and the resulting adverse gender ratio is a slap in the face of our social policy. Whilst the preference for male offspring is rooted in tradition and rituals, the perceived negative financial cost of getting a daughter married is also a major inhibitor. There is ample evidence today, including from neighboring Bangladesh, that conditional cash transfers result in significant improvements in the life cycle of social protection from infant immunization to maternal health and education.  Cash transfers substitute for the opportunity cost to the family of relieving the girl child from household chores (collecting wood and water, rending to livestock) and ensure that the girl child gets minimum levels of health care, nutrition and education. The UID (Aadhar Card) is a key instrument for plugging the leakages usually associated with cash transfers. One hopes that Nilikeni’s physical departure and the likely change in government do not kill this this worthy initiative.

Third, implementing institutional arrangements, already in the Constitution, such as decentralization of administrative and political powers to lower levels of government is a key driver of change. Participation rates of women increase dramatically when decisions are taken closer to home. The woman who is a tigress at home often transmutes into a compliant mouse in the workplace, to remain “below the male opprobrium radar”.

The average Indian woman looks for succor from just four public horrors; (1) the lack of public safety in the street and often also at home; (2) informal gender bars for education; (3) biased job recruitment and assessment and (4) rigid work environments, which do not recognizes their multiple roles as bread winner; home stabilizer and comforter. Their effective participation in the public space needs to fit in within this framework. Doing so, requires adapting national work and public participation practices to local norms and culture. This is impossible at the national level in heterogeneous India.

Fourth, technology is the biggest gender bender but the government does not use it strategically. Monitoring outcomes effectively and improving access to services are two sorely neglected areas. Policing in India continues to be a low tech, “danda” swinging profession. Why cannot an FIR be filed electronically, with a phone number attached for authentication, thereby putting the onus on the police to follow up with the complainant? Why are mixed gender police patrols, armed with smart phone access, to record and report crime and access the crime database, not visible to citizens? Why are blood samples not collected at home in rural areas by mobile agents of laboratories and reports sent electronically to users? Why are interactive phone based health and education counseling services, on the Tamil Nadu pattern, not scaled up nationally? Why do development babus still not have specific household specific, annual targets for the multiple social benefit schemes of government? Why do they have the discretion to fish for beneficiaries?

Gender bending goes beyond public exhortations for change. Role models of liberated upper crust women are non-contextual and often not actionable options for the average woman.

Changing the institutional structures and incentives which reinforce traditional gender roles is a precondition for achieving gender equity. Significant change is going to be tough for men of course, but they coined the slogan “when the going gets tough, the best get going”.

One thought on “Gender benders and the Indian State”