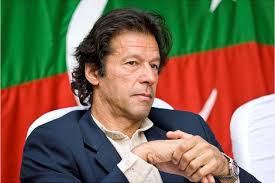 Samson, the mythical Israeli, who was born with the strength to rip apart a lion with his bare hands, loses it all, when Delilah, an unreliable female “partner”, in whom he confides that the source of his strength lay in his long hair, cuts them off, in exchange for “blood money” from his enemies, whilst he is asleep.

Possibly learning from Samson, Imran Khan, the ruggedly handsome, heart throb, erstwhile cricketer and presently a potential Prime Ministerial hopeful in Pakistan, complete with long locks,  pledged during the recent siege of Islamabad, which he led demanding PM Nawaz Sharif’s resignation, that he would not marry (lest he lose his locks?) till a “New Pakistan” dawned.

The South Asian sub-continent is rife with similar examples of political leaders who eschew marriage to serve a higher purpose, implicitly learning from Samson.

Gautam Buddha walked away from his sleeping family and the World, to found a new religion, which has adherents across the world practicing the technique of deliberate disassociation from material things and thoughts via meditation, as a therapy for even tired, dissolute and remorselessly materialistic, Wall Street Bankers.

India is particularly afflicted by this seeming conflict between a higher duty and the pleasures of a family. Sadhus (holy men) are Hindu mendicants, colourfully clad in ochre robes and long hair, matted in a manner any Rastafarian would envy, whom the rest of us have to support as they pursue a higher purpose.

Even politicians are affected by this bug. Jinnah, the founder of Pakistan, was a bachelor. Nehru, India’s first Prime Minister, Jinnah’s contemporary and rival did not remarry after his wife died in 1936. A. B. Vajpayee, the first BJP stalwart to become Prime Minister also never married. Bhen Mayawati, the Dalit leader from Uttar Pradesh; Mamta Banerjee the first time, firebrand, Chief Minister of West Bengal; Amma Jayalalitha, the veteran Chief Minister of Tamil Nadu and PM Modi, all are not married. Rahul Gandhi, the scion of the Nehru clan, pledged himself to the nation in the 2014 elections, also seemingly following that path. But sadly it did not help the election outcome.

There is something incredibly attractive to South Asians about the idea of their leaders giving up permitted pleasures, like having a family, to serve the nation. The notion that a family distracts rather than focuses attention on one’s career, is enshrined in Hinduism, which urges people to renounce material concerns, once they have discharged all their family duties and obligations.

This underlying bias, which views a family as a drag, rather than a resource, was reinforced by the colonial tradition. Young officers under British rule were not allowed to acquire a family till they were (a) old enough to afford one and (b) too senior to be likely to engage in battle and get killed, thereby leaving behind a helpless family to be looked after by the paltun (his army colleagues).

That the family and most importantly a wife, is important in making a man what he becomes, is entrenched in Indian tradition. This is why callow youths, prone to “false” female charms, are not encouraged to choose their own wives, lest they choose Delilahs, as Samson unwisely did, who would only shorn them of their power and desert them thereafter.

Whilst the choice of a spouse or partner is a tough one for any man-politician, it is an impossible choice for women-politicians for a number of reasons.

First, men are wayward. During the extended daily absence of a busy politician wife, whose every waking moment is taken up by matters of the State, heaven knows what the man may be getting up to. Keeping track of a male spouse, boosting his fragile ego and keeping him harmlessly engaged, can quite derange a woman-politician.

Second, not every man can keep looking grand, like Prince Phillip of the UK, whilst perpetually trailing Queen Elizabeth, his wife, and yet remain seemingly content to be perpetually out of the main spotlight. Some male spouses of powerful women, are prone to leverage their position, to their advantage in business thereby potentially wrecking the woman-politicians career.

There are very few “Power Couples” like the Clintons, who have perfected the “art of living and thriving together”. In India, Prakash and Brinda Karat of the CPI (M), stand out as one such power couple. But sadly such sharing of power does not seem to have brought political dividends.

In India, such successful, congenial power play, is seen most often in the bureaucracy, where it is used to deadly effect. In contrast, politicians are still too seeped in the male-dominant tradition and need to catch up with their bureaucratic colleagues. Possibly, the political environment reflects main steam India, with all its social inhibitions better, whilst the bureaucracy, after all, is just a chip-off-the-Colonial block and thereby retains some characteristics of a more western orientation.

The real problem of course is not the fact of the marriage but its outcome in children and a spreading net of close relatives all whom want a finger in the power pie. Indian parents are culturally tuned to cosset their children endlessly. Combine this cultural trait with access to political power and you have the beginnings of a corrosive dynasty.

PM Modi is a competent and charismatic man, but the fact that the only thing he will leave behind is his collection of kurtas and turbans and several large development projects dedicated to the nation, is chillingly compelling. Indeed this was also the Mahatma’s magic and possibly the reason for his forsaking his family. His meagre personal belongings, his charkha and his thoughts are all we are left with and yet, they are more powerful and long lasting, than all the riches in the world and the combined political force of the State in India. Maybe we should go back to our roots.