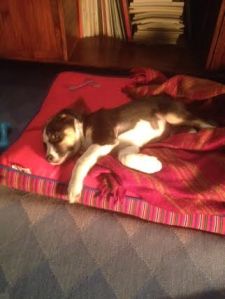 Hello. My name is Sheru and I am 14 months old. I’ve learnt an awful lot since I was born and feel like an adult.

I never knew my father but my “uncles” were pretty supportive and protective. My mother was highly wired and plagued by traumas. But I loved her and would never have left her had I not been kidnapped.

I was one of six siblings. We were forced to huddle like monkeys for warmth because I was born during the winter month of November 2014 to a poor family in New Delhi. I have fuzzy memories of people saying that I was born on chacha Nehru’s birthday (November 14) and was blessed with a great future.

We were never short of food. My mother was a poor provider but the people around us really pitched in. They fed us milk, chawal (rice), dal (lentil) and biscuits. I liked biscuits the best. To this day the crackle of a polythene cover makes me drool.

One young woman was particularly fond of me. I think of her as my surrogate mother. She lived nearby and we would wait impatiently for her daily visits. She always brought something we needed. A mattress; a soft woolen shawl to burrow into and sometimes delicacies, like chopped liver. But far more than food, it was her warmth and her love for us, which I remember.

One month passed in this happy manner. We played outside when the Sun was up but stayed safely inside when it was cold or over-cast. Our mother and instinct taught us to be wary of three sources of danger- unfamiliar adults; huge machines which thundered along on the road outside our home and the people who lived in the houses around us and disliked the mess our potty, albeit insignificant, made to the clean surroundings.

It became colder as dreary and grey December wore on. It was becoming difficult to live life in the open. One day we woke up to find one sibling had quietly thrown in the towel. I hope she gets reborn some place better. Two weeks on and another sibling got crushed by a steel monster, whilst crossing the road. We were too scared even to go and check on him but he must have died instantly. It was becoming so hopeless that we almost envied the ones who died. When you are down and out, any change is better than the agony of the present.

I was getting bigger but also more depressed as I began understanding the bad cards life had dealt me. My “home” was a pipe which became a river when it rained and we had to struggle out of the way of the gushing water to survive.

We had to constantly try to remain invisible. The people who lived around us treasured their privacy and did not encourage others to occupy the spaces they owned. This is also why I became addicted to the night life- that was when the streets were empty and the houses dark and quiet leaving us free to roam. This was also when I watched adults moving about in packs which have a very strict hierarchy based on merit- mainly the ability to overawe and out-fight the next contender.

I was settling into a routine. 1 PM to 6PM was my sleep time followed by foraging for food till 12 PM by when the adults took over the streets. Sleep till 9 AM and then look for food helpfully offered by some kindly people, who spent their day, sitting next to the gates of the big houses around us. Shanker was my favourite. He often shared a sweet tasting delicacy with us. He said it came straight from God.  I have a sweet tooth till today courtesy Shanker. He was quite old and was respected by those around him too who called him Guard ji. Legend has it that he had shot people in cold blood. But it was unclear whether this was a dacoit in ravines of Chambal or after he joined the police. He carried a huge double barreled shot gun to prove his credentials. I felt safe around him and he liked me too, because I would watch out for people coming out or going through the gate next to him whilst he slept fitfully.

My early depression was passing with every new day as I slowly adjusted to my life; the environment and the people around me. I was also becoming the guardian of my remaining three siblings. My mother had almost given up on us. My siblings were timid and remained smaller than me, since I got to the food first every time. Was I selfish? Possibly, but I had to be strong since I guarded the entrance of our home from intruders and was the first in line with my siblings huddled behind me.

I didn’t know it then but big changes were in store for me. Shanker had told me that God would look after me.  So I was hopeful that things would turn out alright. But when the change came I was taken by surprise.  (to be continued)