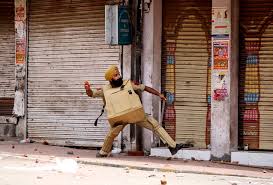 The defining feature of India today is bottled up, seething anger. It erupts unexpectedly anywhere — in the plush drawing rooms of the rich, on our choked roads, in crowded, middle-class colonies over parking rights or in the ramshackle dwellings of the poor, over imagined insults and petty money disputes.

Political pundits have forever advised politicians not to raise expectations too far beyond what can be realised or delivered, precisely to avoid such a backlash of sullen resentment or angry outrage. Yet, this has never stopped politicians from continuing to make rash promises.

Contrast this with the behaviour of bureaucrats, who are usually conservative with promises and targets. This could be because they have little to gain from aiming high. With no upside, why take a risk? Is risk aversion holding governor Raghuram Rajan of the Reserve Bank of India from lowering interest rates and thereby risking inflation? This could be one, albeit implausible, explanation.

Alternatively, maybe, the RBI governor and his team have watched Albert Pinto… carefully and remember that nothing can be worse than creating expectations and not meeting them. This government was voted in on the plank of restoring fiscal stability and providing jobs. Inflation can totally disrupt both objectives.

The political problem, of course, is the 10 million young people, who join the workforce every year. They voted the government into power and are now looking for the jobs they were promised. Telling them now that they lack a job because they lack skills, is a Kafkaesque googly that could result in a Pinto-type outburst on a massive scale. Hence the political pressure to kick start growth.

But what is the surety that lowering interest rates alone will result in more jobs. The world is finally flat — at least in terms of prospects for economic growth. In this dull market, with large inventories and surplus manufacturing capacity, new manufacturing jobs can only be created by ramping up protection for domestic industries. This option, as anyone who has driven an Ambassador car will know, has disastrous long-term consequences for productivity and competitiveness.

A better option to increase the competitiveness of Indian exports and provide protection to domestic manufacturing, would be to depreciate the INR as China and other competitors have done. But here again the ghost of potential inflation lurks via higher landed cost for petroleum and edible oil. The possible flight of foreign capital threatens the stock market and the external account. The higher cost of servicing the foreign debt of businesses is also a downer.

In any event whilst the macro-economic variables are tweaked, direct, rapidly deployed interventions for growth and employment are needed to meet expectations. Three “win-win” options stand out which are reasonably non-inflationary; targeted at jobs and quickly implementable.

First, get a grip on administrative reform and focus on tangible outputs and outcomes. The determination to get the Goods and Services Tax (GST) implemented by April 1, 2016 shows the way, as does the focus on ramping up highways construction and making Indian Railways more efficient.

Second, the steps being taken to increase domestic coal production via the transparent allocation of mines and gas production via price incentives for exploration in difficult fields, are necessary foundational work, albeit with medium term benefits.

More immediately, the Union government needs to restructure the accumulated loss of Rs 2 lakh crores of the electricity distribution utilities, as was done previously-albeit at a much smaller scale- in 2001. This is the only way to reactivate the demand side and realise the downstream benefits of enjoying, for the first time, an idling surplus generation capacity. But the 24×7 “electricity for all” mission can only be sustainable if it is linked to reasonable cost recovery for the utility and the complete stoppage of theft. This is one subsidy hole which is completely avoidable.

Third, an interim option to whip up “employment”, in these troubled times, is to offer a two-year National Service Mission for all young citizens of ages 19 to 25. One million young adults, each paid a stipend of Rs 6,000 per month by the government, could be offered this opportunity with a relatively nominal annual outlay of Rs 14,000 crore. For the young, this interim employment could be a “holding plan” while they look for a job. For the government, it buys time to create the environment for incremental private employment.

To weed out the rich, the poorly motivated and the faint-hearted, these young men and women would need to work in the 6,000 rural development blocks which dot the country and acquire skills on-the-job, in forestry, agriculture, irrigation, civil engineering, policing, security, public health, sanitation and education. They would function as management trainees and be placed according to their aptitude, education and skills. Trainee doctors are already required to do such service.

If the scheme were to be presented as just an opportunity for the unemployed and the poor to earn some money, it would end up being a less useful replica of its cousin, the Mahatma Gandhi National Rural Employment Guarantee Act. To brand the mission appropriately, it must attract the educated young across the social and economic spectrum.

To profile it as an option for high achievers it should be made compulsory for all aspirants to public office — budding politicians, potential judges and future civil servants — to start by experiencing life at the bottom of the public service ladder even before they fight an election or take the entrance exams.

Considerable social benefits are possible by bringing together the young from disparate groups in a competitive environment over extended periods. The resulting cohort networks of “desh sevaks” would be unique. Unlike educational or social networks these would cut across class, regional and religious rigidities and narrow the gap between “people like us” and “others”.

The first step in anger management is to feel equally responsible for the situation one is caught in. Albert Pinto and his ilk might have been less disillusioned and less angry had they had the chance to be a “desh sevak”.

Adapted from the authors article in the Asian Age August 13, 2015: http://www.asianage.com/columnists/albert-pinto-s-anger-redux-856