It all began 300 years ago with the ringing command of “Koi hai?” — Is anyone there? This being how the ruling, colonial elite announced their arrival at home, in the office or, indeed, anywhere, if there was no one to receive them. The immediate response was a servant at home, or a peon in the office, scurrying out with folded hands to acknowledge the master’s presence with “hazoor — at your service, Lord”. 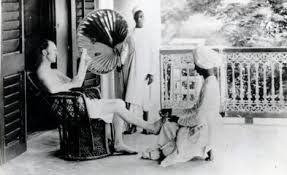 The services required could vary: Pulling the giant, overhead canvas fan to and fro with a rope; fetching a refreshing drink for the master; gently slipping off his riding boots whilst the master is sprawled on a “planter’s chair”; bringing in voluminous, cloth-bound, paper “files” or taking out those “disposed-off” by the master.

Becoming a peon was also, usually, the entry point in government service for most “natives”. You first got a job as a handy man around the master’s house, courtesy a trusted relative, and then graduated to the office, as a peon, if you were passably literate and could inveigle yourself into the master’s trust.

Things have changed somewhat, but not much, over the nearly seven decades of Independence, since 1947. The corridors of power are still lined with peons sitting outside the rooms of their officers, fetching tea or samosas, carrying “files” as they wind their serpentine way up, down and sideways amongst the officials who rule India today.

All this is accomplished without the “master” even uttering a word. Peons know their masters better than they know their own spouse or children. A glass of water or tea miraculously appears, visitors and even office staff are carefully screened for “priority” before they can meet the master. Lunch is unpacked from the “tiffin”, heated and served on time. Peons even take on the task of ensuring that sahib eats his medicines!

Peons have long work days. Those attached to senior officers reach the officer’s home early to carry the files which have been worked on overnight, to the office. Their day ends only after they have carefully placed a new lot of files for “overnight disposal” on the sahib’s desk at home. In between they might have been instructed by the memsahib or, more likely today, mataji or behnji, to bring along some urgently required domestic ingredient that has run short, pick up the clothes ordered with the tailor or go by the Central Public Works Department office to check when they are likely to repair the fan in the bedroom.

For all the routinised drudgery of the job there are compensations:

The pay and dearness allowance (Rs 12,000 increasing gradually to Rs 20,000 per month) is twice what they’d get in a similar job in the private sector. Unlike the private sector, the job is permanent till you retire at the age of 60. 45 days of leave and 120 days on which the office is officially shut in a year along with medical and half pay leave.

Pay is 100 per cent indexed to inflation. Government contributes equally to your provident fund and pension and provides a handsome gratuity on retirement.

The job is not transferable, so you can grow deep roots where you belong.

Even if you goof-off, you are attached to a less important officer or an office where there is no public contact and, hence, very little prestige.

In 2006-07, nearly 26 per cent of the 3.2 million employees of the Union government and Union Territories were in the lowest grade — D, which applied to peons, safaiwalas, watchmen, mallis, packers or records sorters. An additional 67 per cent were in the higher grade, C.

By 2012-13, grade C (into which the lower grade D was merged in 2006) comprised 90 per cent of the 4.4 million Union government employees. 88 per cent of grade D positions were in departments which are spread all over the country — the railways, police, defence, civilian employment and the post office. These departments are physically spread across the country and therefore natural “sinks” for those seeking employment in grade C jobs which account for 90% of civilian employment.

It is not surprising that the demand for grade C jobs far outstrips the supply — sometimes up to 5,000 applications for every advertised vacancy. In comparison, for a grade A or B job (IAS, IPS and other central services), the number of applicants is a measly 1,000 per vacancy. Why this skew?

First, only 44 per cent of Indian students clear the secondary school stage of class 10, which is the bare minimum to apply for a grade C job of a peon. The completion rate falls dramatically in high school. Only 20 per cent of students enrol for tertiary levels. Consequently, the available pool of applicants is the highest for low skill jobs in grade C, particularly in Tier II and III towns and rural areas.

Second, officials in the lowest, merged grade C are compensated much higher than their private sector comparators, whereas grades A and B, which require higher minimum academic qualification of BA/BSc and are recruited through the extremely demanding Union Public Service Commission examination, are paid much less than their private sector comparators.

This irrationality is a throwback to our socialist past when “vulgar” income disparity between the highest and the lowest was frowned upon.

Third, as recommended by the 6th Pay Commission, 2006, grade D was merged into the higher grade C. Direct recruitment into the cadre of lower division clerk — a grade C entry level position — was discontinued and the vacancies reserved for promotion from the erstwhile grade D employees. This opened up promotion prospects for grade D employees via internal examinations to eventually become an assistant section officer through the “back door”.

Fourth, unlike in the past, the selection process is more inclusive and transparent. The Staff Selection Commission conducts an examination and an interview. This incentivises even those without patronage networks but with merit to hope for a grade C job.

But the new, over-qualified, hunting for fast promotions peons are unlikely to remain humble supplicants, as in the past, catering to their master’s every whim and fancy in a pale recreation of colonial grandeur. Once peons become “uppity” they will cease to have utility as well-paid extras in a period play. Low-skill jobs will be eventually outsourced, once government decides to restructure the public workplace. But till that happens, the rusted public sector “steel frame” will be held together by highly over-specified, grade C peons — the “nuts and bolts” of the government.

Adapted from the authors article in Asian Age September 23, 2015 http://www.asianage.com/columnists/paean-peons-647