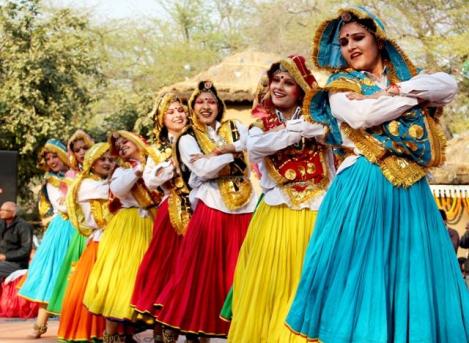 Haryana’s folk dances are vigorous and fiesty like its people. Photo credit:alchetron.com

Haryana wears its heart and mind on its sleeve. There is a lot of brawn and bravado but little guile here. Last week, the Haryana Assembly listened in rapt attention to a pravachan (teachings of a holy person) by a Jain monk. Alarm bells rang immediately in the citadels of prickly pseudo-secular vigilantism.

The Indian Constitution clubs Jains, Sikhs and Buddhists under the broader rubric of “Hindus”. So, the choice of a Jain monk, rather than a Hindu priest, to preach to the Assembly was a clever and far-reaching tactic to formalise the mix of religion with politics. Clever, because the minority Jain community is being used as a proxy for Hindu thought. Far reaching because, frankly, it was disturbing, coming from an overwhelmingly Hindu state, ruled by the BJP.

In these fractious times, an overt mix of religion and politics is unusual. The practice has been to keep religion distanced from the formal processes of the State, whilst discreetly extracting political mileage from religious discord. Secular fundamentalists cavil that unless the strictest oversight is exercised, in this God-fearing, Hindu dominant country, religion can creep into politics and governance, to the detriment of marginalised communities. They have a point. In earlier days, prayers on public occasions were explicitly secular. Holy men from all major religions were allotted time for doing their bit. But this tradition has waned during the last two decades. Hindus no longer feel obliged to be subdued, lest they offend minorities. This is a healthy development. Truth needs to be spoken and recognised before reconciliation can happen. Paying lip service to secularism, whilst practising a more partisan strategy, has done little for those away from the mainstream.

1986 – Shah Bano – a Muslim, who had to fight a majority government, pandering to populist Islamic orthodoxy, for getting maintenance from a divorced husband, even after getting relief from a progressive judiciary.

The “syncretic” culture of India is predominantly Hindu. We are more comfortable with Barelvi Sufi version of Islam than the more strident Wahhabi Deobandi type. This illustrates that strident, ritualised religion — whether Hinduism, Islam, Christianity or Sikhism, does not align with the benign and neutral constitutional provisions. Citizenship, not religion, is the primary identity of Indians. This is the essence of a modern, secular state.

Haryana has initiated a novel experiment of democratising religion by inviting a never-before direct interaction between a religious leader and elected legislators. This has been long overdue. Legislators reflect voter preferences better than intellectuals. But their formal duties thrust them into an artificial bubble, which bars frank recognition of the extent to which religion both deeply divides and elevates India. Nothing wrong in puncturing the bubble. But the Haryana experiment will lack credibility as a “positive new beginning”, unless it promotes similar interaction with religious leaders of all denominations.

Religion can be inherently divisive, particularly in the highly-contested political environment of democracy. This is why Communist regimes stand out from other political parties, in that they steadfastly ignore religion. Harkishan Singh Surjeet, the wily politician and grand old man of the CPI(M), passed on in 2008. He was a Sikh. But at his funeral, there were no religious rituals beyond a spirited Lal Salaam. Contrast this with the traditional rituals which accompany the sendoff for other departed leaders.

The Indian “glue”: beyond religion?

The overlay, mostly incipient but often explicit, between religion and politics, has been a fact in the subcontinent since Independence. Pakistan hived itself off into an Islamic state consisting of physically and culturally separated West Pakistan and Bengali-speaking East Pakistan, now Bangladesh. Surely, the fact that Pakistan split subsequently, despite a common religion and that Nepal, despite being a predominantly Hindu state, holds its sovereignty dear, sufficiently illustrates that Hinduism is not the primary glue which binds India. India is predominantly Hindu. But significant political jurisdictions, where 32 per cent of our people live, are not. These states cannot ignore the salience of a plural polity. Nagaland and Mizoram are predominantly Christian; the Kashmir Valley is Muslim; Punjab is 60 per cent Sikh; 20 per cent of West Bengal, 18 per cent of Uttar Pradesh and 17 per cent of Bihar is Muslim; 19 per cent of Kerala is Muslim and 25 per cent is Christian; Goa is 26 per cent Christian.

Rather than hiding from religion as an identity, dealing with it upfront and sanitising it democratically, could have real value. The pseudo-secularist approach, driven by 1950s beliefs in modernity versus tradition as values, rather than processes, relies on insulating politics from religion as the right way to go. Nothing could be worse, if the ground realities do not reflect this belief.

Far from fading away, across the world, religion as an identity is fighting back. And this is true across all religions. The modern state needs to explicitly factor in the resilience of religion as a treasured personal belief. But just as surely, the State needs to enforce constitutional rights across all religions. In particular, the religious marginalisation of minorities, dalits, women and the lesbian, gay, bisexual and transgender community come to mind. The available constitutional safeguards need to override religious biases against these communities. Upfront, visible confirmation of this intent by the leadership would be transformative.

If Haryana has this resolve then bridging the gulf between politics and religion makes eminent sense. If the moral fiber of politicians can be strengthened by religion, without diluting their constitutional commitment to safeguard the marginalised, the benefits of religious teachings far outweigh the costs. After all pragmatic Haryana filters all actions through the “value for money” lens.

But it is a thin line the legislators walk between legitimising naked majoritarianism — Haryana is 95 per cent Hindu — and spring-cleaning their minds as they run through the full gamut of multi-faith religious discourses in the Assembly. The stout bamboo lath (stick) that the archetypal Haryanvi “tau” (great uncle) is caricatured to carry is as useful to balance on a tight wire as it is to subdue dissent. It all depends on the intent with which it is wielded.

Adapted from the authors article in Asian Asian August 30, 2016 http://www.asianage.com/columnists/jain-monk-house-unhealthy-precedent-052