Posted on January 14, 2017 by Sanjeev Ahluwalia

Some pictures may be worth a thousand words. But when the two are put together, as in a video, they evoke deep emotions and convey subliminal messages. Watch the master of the spoken word — Barack Obama, in his January 2016 address on the mundane subject of gun control in the United States and you will see what I mean. It is unfortunate, that despite the best talent in branding and outreach we fail to use words which convey our intent unambiguously.

Consider the name of the government department, which is supposed to privatise the public sector. It was created in 1999 under the BJP-led NDA regime and helmed by finance minister Arun Jaitley. Even way back then, it was clear it would not take root. Mandated to raise capital through privatisation — it ended up being named, hypocritically, the department of disinvestment. “Divestment” would have been more proximate to the intent. But the fuzzy name, matched the lack of sustained resolve for a big-bang approach to privatising the public sector. It muddled along till, mysteriously, in April 2016, it was cumbersomely renamed as the department of investment and public asset management (DIPAM). It does nothing of the sort. Its core mandate remains to sell the industrial Central public sector. Public sector investment and asset management continue to be the mandate of every line ministry, for the state-owned enterprises (SOE) under them. No wonder then that the Central public sector not only lingers but grows.

In 2015, there were 235 operating SOEs. But an additional 63 were coming online. One-third of the operational SOE made a loss of Rs 27,000 crore in 2015. The data for 2016 is yet to be publicly shared. But there are unlikely to be surprises here. Named badly at birth, the department lingers on much like the loss-making SOEs. 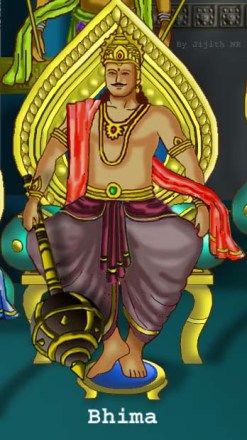 Consider also the new government-sponsored payments app named Bharat Interface for Money (BHIM) created by the National Payments Corporation. The app was ostensibly named after Babasaheb Bhimrao Ambedkar — the learned dalit leader and constitutionalist. A payments app named after Babasaheb is quaint just as launching a human rights initiative in his name would resonate. The app is more likely to be associated with the brute power of the legendary Bhim from the Mahabharat conveying that the app is safe and impregnable. Yes, security is one important feature of an app. But it must also be nimble, adaptable, scalable, efficient and convenient to use. Bhim of the Mahabharat was none of these. Legend has it he was pretty resource-intensive — gobbling up nearly as much as all his four other siblings and was difficult to discipline, much like an invincible Robocop. “Killer app” is how kids term an outstanding app. But slang shouldn’t be taken literally to name government initiatives.

Prime Minister Narendra Modi, in his New Year’s Eve address to the nation, fell into the same rhetorical trap of belting out a preachy sermon but chose the wrong words. He stressed purity, pain and renunciation as key processes for exorcising evil — in this case black money and corruption-fed terrorism, Naxalism and Maoism.

Left unanswered was who should feel the pain more and make sacrifices — the honest many or the dishonest few? Also, conflating Maoism and Naxalism with terrorism, drugs and loss of human rights is okay if you are a right-wing, conservative American. But in India, these misguided socio-economic movements are the consequences of state failure in providing a basic level of welfare to the poorest of the poor. One cannot simultaneously romance the poor for their virtues — fortitude and honesty; finger the rich for their vices — dishonesty in evading tax, wallowing in luxury in big city bungalows — and yet denounce social movements which seek to give voice to the marginalised, however unpalatable their senseless violence may be.

BJP – get your mojo back

The BJP came to power in 2014 as the voice of reform and growth. It has traditionally been private sector-friendly. This resonated with an India fed up with populism and ersatz socialism, unemployment, poverty and a low quality of life. Touting the cause of the poor by pulling down the rich was never meant to be the BJP’s trademark. The Communist parties and the Congress fight from that shrinking corner of the electoral base. The poor versus rich genie will now be difficult to put back into the bottle. This will be particularly so if growth disappoints and economic stability suffers — both of which are near-term probabilities.

A strong government can trample over many citizens’ rights so long as it can stuff the mouth of citizens with money — as in China. But no money, no jobs and no rights are the fertile grounds on which violence, Naxalism and Maoism thrive.

Keep the narrative simple, not simplistic

Multiple objectives in public governance are a recipe for disaster. One hopes that in the waning days of this fiscal the government will shed some of the fluff it has accumulated. Focusing on infrastructure, macro-stability and private sector-led growth is the only option for creating sustainable jobs and reducing poverty. If an all-out fight against corruption is a must, because of electoral promises, let it begin where corruption breeds. This is in the public and not in the private sector.

A trishul for action

Three initiatives are overdue. First, make the funding of political parties open to public scrutiny. This is a far more important political reform than having simultaneous elections. Second, exorcise the public sector of corruption before terrorising the private sector. The bribe-giver is the victim of an unresponsive governance system. It is the bribe-taker who is delinquent. It is public sector banks, public service departments, the police and the lower judiciary which need to be “purified”, not the voting public. Third, restore the credibility of regulatory institutions by respecting Chinese walls purposefully built between them and the government. The Reserve Bank of India seems to be the latest victim of executive activism in the demonetisation snafu. Let’s ring the curtain down on disruptive, executive muscularity.

Adapted from the author’s article in Asian Age January 11, 2017 http://www.asianage.com/opinion/columnists/110117/to-create-new-india-3-initiatives-overdue.html