Conspiracy theorists are hard at work to identify the drivers behind the ongoing cash crunch, that has left the automated teller machines (ATMs) in cities and towns across large parts of the country dry. There is much finger pointing between the Reserve Bank of India and the commercial banks, both private and public sector, each accusing the other of being responsible for inefficient operations. It is unusual to see this level of discord, bordering on acrimony, between a regulator and the regulated entities.

The banks allege that the supply of high-value notes has dried up. The Bank Employees Union alleges that a shortage of imported printing ink at the currency press in Nashik could be one reason. Alternatively, this could be a covert attempt by the government to correct a problem dating back to the November 2016 demonetisation — the incomprehensible introduction of a Rs 2,000 note to replace the Rs 1,000 note as a measure to reduce black money. Phasing out the offensive new high-denomination note and stepping up the printing of new Rs 500 and Rs 200 notes instead is a more obvious and welcome blow against black money. The Ministry of Finance says Rs 70,000 crores worth of such “Hi-Value” notes can be printed in just one month. The value of such notes in circulation on March 31, 2017 (the last public data available) was Rs 7.5 Lakh Crore or ten times the value of such notes printable in just one month. So why a shortge ?

The Reserve Bank, unconvincingly, denies that there is any cash crunch and alleges the inefficiency of banks in properly allocating the available cash. Could this be a surgical strike by the banks and ATM service providers who have got unsettled by the criminal investigations into fraud or are upset with the March 2018 decision of the RBI to end the incentives for installing cash recyclers and ATMs for low-value notes? Was it their intention to embarrass the government by engineering a cash crunch to coincide with Prime Minister Narendra Modi’s visits to Sweden and the UK for the Commonwealth Summit? Possible, but far-fetched.

The most plausible reason is that the economy is reverting to its pre-demonetisation levels of cash held by the public of around 12 percent of GDP versus the hugely constrained post-demonetisation level of 9 percent of GDP in end of March 2017. Expectations were exaggerated on two counts. First, that the black economy would permanently be reduced. Second that digital and banked transactions could become uepreferred options. The second has indeed proved true. The use of cash by those who declare their incomes to tax, or even those below the tax levels, has reduced significantly.

But the big stick and carrots embedded in the Goods and Services Tax to incentivise the switch to banked transactions are not widely experienced yet. Systems and reporting compliance are clunky and curiously disadvantage the small, honest entrepreneur. Other small businesses may be unviable with a tax load.

RBI – bitten by the bug to ration currency, & create the “statistical” basis for “digital victory”

Anecdotal evidence of how cash transactions are done show that post demonetisation, Rs 2000 has replaced the earlier Rs 1000 note as the preferred stock of currency held by high value entities and individuals. Unfortunately, RBI has squeezed the printing of this note. Prior to demonetisation, for every Rs 1000 note available, there were three Rs 500 and three Rs 100 notes. Post demonetisation, for every Rs 2000 note available, there are eight Rs 100 notes but just two Rs 500 notes available. RBI has curiously enlarged the relative supply of the highest value note (which is used mostly for individual stock of currency)  at the expense of having more transaction related currency in Rs 500 notes- possibly hoping that transactions would move to digital rather than remain in cash post demonetisation.

More importantly, not only has the overall quantum of currency, relative to GDP decreased, but even the share of Rs 500 and Rs 2000 notes, by value, in the total stock of currency has decreased, from 86 percent pre-domentisation to 73 percent in end March 2017 – possibly in expectation of individuals banking surplus stocks of money.

The ground reality is that the cash-based supply chain of goods and services is a subset of the demand for cash contributions, related to electoral politics. Highly contested elections are scheduled for mid-May in Karnataka and later this year in several other states. Cash resources will be needed to buy SUVs, print advertisements and motivate the lethargic population to vote. 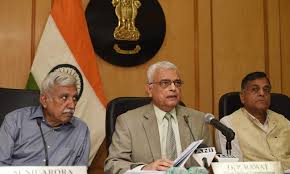 Oddly, there is not a peep out of the Election Commission of India (ECI), which is charged with the responsibility of ensuring that election spending remains within the implausibly tight limit of Rs 20 to Rs 28 lakhs per candidate for Assembly elections. The EC has adopted an “end of the pipe” strategy. The intention is to catch the crooks once they show their hands via excess expenditure. A more proactive EC could have recognised the red flags of unusually high cash withdrawals unearthed by the media. It could have directed the Karnataka government to report on the ensuing potential for subversion of the code of conduct and the measures being taken to heighten border vigilance, to clamp down on cross-border transfers of cash. One can imagine former chief election commissioner T.N. Seshan diving through this open door for enhancing the regulatory ambit of the ECI. But today’s election commissioners appear to be content, at least overtly, with a narrower definition of their mandate, strictly as per the law.

RBI – a regulator at odds with its “caged parrot” status

To speak the truth, the glory days of Indian regulatory institutions are over. Even the RBI, the first to be legislated into existence in 1934, is going through strained times. Demonetisation had spread the apprehension that the RBI was led by the nose from North Block in New Delhi. The extent of wilful defaults in the bad loans of public sector banks, often the consequence of ever-greening of impaired assets and plain fraud, also points a finger at the RBI for exercising inadequate oversight.

RBI governor Urjit Patel had appealed to the government through a public address on March 16 to bring public sector banks into a uniform regulatory arrangement as applicable to private banks. Domestic and international professionals support the broad thrust of a uniform regulatory arrangement for all banks. But the subsequent expose of the yawning deviations in ICICI Bank and Axis Bank from gold-standard board governance have cut the ground from under the governor’s feet.

Public credibility of commercial banks at its nadir

Mutual funds are upbeat about the prospects for equity investment in private banks. But the average person is inclined to quietly diversify away from private banks to the safe haven of public sector banks. Private insurance and healthcare are similarly perceived as being exploitative of the average consumer. It does not help that the Financial Resolution and Deposit Insurance Bill 2017 was worded so ambivalently that it fanned a deep seeded fear of savings deposits being sequestered as equity for resolving bankruptcy. Finance minister Arun Jaitley has been at pains to assure people that deposits up to Rs 1 lakh per account will remain guaranteed. But ministerial assurances provide very little comfort when elections are around the corner.

A common thread across this turbulence is uneven support from the government for beleaguered institutions and the absence of informed participation, quite unlike in the GST Council. RBI governor Patel bravely sat out the storm around the hasty implementation of the questionable policy option of demonetisation. But the Pandora’s box of crony capitalism has taken its toll. These are challenging times. Deeper bench strength, within the government, of trusted fiscal and financial expertise would help.

Adapted from the authors opinion piece in The Asian Age, April 21, 2018 http://www.asianage.com/opinion/columnists/210418/what-the-cash-crunch-foretells.html