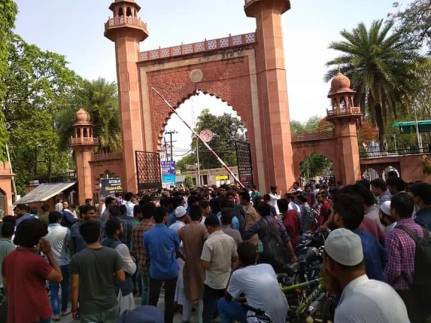 One wonders whether Muhammad Ali Jinnah would have been disappointed or elated at a band of misguided, ultra-right Hindus, objecting to his portrait hanging in the students’ union office of the Aligarh Muslim University. Disappointment, at becoming a hate object, would fit well. the elegant, urbane man with a taste for fine suits, that Jinnah once was. Elation would align with the politician, who fueled the creation of Pakistan and who could now turn around and say – see, I told you so.

After all, it is a belief in the irreconcilable co-existence of Hindus and Muslims in one country, which led to the creation of Pakistan. The breaking away of Bangladesh from Pakistan, should have put an end to the unfortunate idea that only an Islamic state can assure a secure future for Muslims. Wars between Pakistan and India have deepened the distrust of the larger “Hindu” nation across the border. To be fair, we in India, have also not done a good job of forging a national identity, so compelling, that other social allegiances – religion and caste, fade in comparison.

It is true that professional, social relationships and regional affiliations – culture, language and food – often paper over the underlying segmentation of caste and religion. But seven decades of hotly contested electoral democracy has fed on and deepened the fissures, rather than cemented the gaps. In India we tend to avoid head-on collisions, preferring to skirt around intractable problems and hope that time will solve them.

Our history bears this out. Consider that a deeply traditional society was assumed to have magically evolved, on the eve of Independence, into a rational, scientific and liberal society, resonating with the personal beliefs of a microscopic, western educated elite, which was dominant in the transition from colony to independence.

If Jinnah’s vision, etched out in the constitutional assembly of Pakistan in 1947, of a Pakistan, which would not make a distinction between citizens on religion, sounds hollow, so too does our avowed adherence to secularism – the constitutional roots of which remain shallow.

India is a “soft” state. The rule of law is not absolute. It has a time dimension. It is considered administratively wise to allow it to be bent, in the expectation that, with time and changed circumstance, the weight of institutional rigidity would bring it back to its rightful place. Inevitably, such flexibility in the application of the rule of law allows free play to mala-fide interests and dilutes the credibility of State actions.

Democracy has unexpectedly, sharpened religious polarization. The good news is that it has also deepened caste polarization. Baba Saheb Ambedkar’s pessimism about Dalits getting justice via democratic institutions, without suitable tweaks and safeguards for positive discrimination, resonate much deeper today, than they did in the rosy-tinted period post-Independence.

Dalit empowerment has created a conundrum for traditional Hindu society. It upends the gentlemanly agreement between Dalit and upper caste political elites, to co-exist without upending the basic power structures which bind down the ordinary Dalit. For example, grooms must not ride a horse to their wedding in emulation of a custom, which was the traditional prerogative of prosperous upper caste people or display and fire into the air in celebration, at Dalit weddings.

Everyone is relatively better off

Admittedly these are mere, distant pinpricks when viewed from above. The helicopter view of Indian society remains positive and progressive. Urbanization evens the score for Dalits. The enormous expansion of the service sector has created jobs which are skill based, caste-neutral and anonymous. Similarly, exports offer opportunities for good jobs in handicrafts, textiles, leather, metalwork, carpentry – areas where Dalit and Muslim communities dominate.

Communalism, casteism and low development feed off each other

Luckily for us, much of the religious and caste angst is in the backward areas of the north and central India, where human development indicators are low and per capita incomes are below the median level. In 2007-08 India’s median Human Development Index (HDI) was 0.47. The states of Bihar, Jharkhand, Orissa, Chhattisgarh, Madhya Pradesh and Uttar Pradesh, comprising 41 percent of the total population, were well below the median.

Curiously, Pakistan in 2010, with an HDI of 0.53 was worse off that the border Indian state of Punjab at 0.61 (2008) but better than Rajasthan at 0.43 (2008). Bangladesh, in 2010, with an HDI of 0.55 was better than the Indian state on their border – West Bengal at 0.49 (2008). Cross territory comparisons are notoriously misleading. But it is startling than even several decades after political separation, the cross-border differences in South Asia are less stark than those within the country. India has made significant strides in improving human development outcomes since 2008 and achieved an HDI of 0.62 in 2015 with focused attention on backward regions. The Modi governments program of targeting around 15 percent of the total number of 640 districts for accelerated support, will further even out the spatial distribution of development and income.

In 2014 the Modi government came to power on the back of an impressive record of achievement at the state level in BJP rules states. A host of development initiatives have been unleashed, which seek to sustain macroeconomic stability, raise incomes, roll out infrastructure and reverse the ravages of environmentally unsustainable development. There are more successes than misses. This is solid ground on which to go to the people in the general elections of 2019.  It is unwise to fall into the temptation of maximizing political gains by departing from the narrative of achievement.

Also available at the TOI Blogs May 9, 2018   https://blogs.timesofindia.indiatimes.com/opinion-india/resurrecting-ghosts-is-bad-politics/