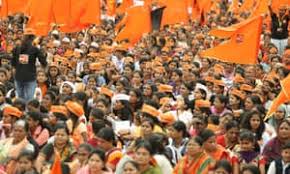 A single event gives rise to asymmetric consequences- intended or otherwise. If you fall down the stairs and hurt yourself – it’s an unintended disaster for you and your family. But to the doctor and her staff patching you up, it’s an entirely expected consequence. For a colleague, who steps in for you at work, it’s an unintended opportunity to showcase her competence and should she fail an unintended reiteration of your indispensability at work.

If the BJP wins in four out of the five states where assembly election results will be announced tomorrow (a BJP win in Mizoram is implausible) –  it is a disaster for the Congress (in MP, Rajasthan and Chhattisgarh); the Telengana Rashtriya Sangathan (TRS) in Telengana; the Bahujan Samaj Party and its ally Ajit Jogi’s – Janata Congress in  Chhattisgarh. But if these victories lull the BJP into easing-off on aggressive Hindutva, this would be an unintended pleasant consequence for some who might have voted for the losers on an anything-but-the-BJP basis.

This scare or overkill might have the unintended consequence of nudging the opposition into a tighter pre-election arrangement for the 2019 general election – which would be bad for the BJP.  Also the victorious BJP governments would have to match their poll rhetoric with achievements in a short time span to avoid voter cynicism or face the consequences in 2019.

Any other party coming to power on December 11 might exult. But they will face the same managerial challenges of delivering on the ground over the last quarter of this fiscal year. Somewhat more difficult might be aligning their budget for fiscal 2020 to their election rhetoric.

The consequence of Presidential style governance

An outright BJP victory in three states -Telengana will most likely re-elect a TRS government – would have consequences within the BJP. It would force the partly exposed knives to be sheathed. A loss of even two out of these three states for the BJP would have the unintended consequence of strengthening the resolve of those who would like to weaken the Modi-Shah control over the party and the government.

One unintended consequences of a de-facto “Presidential” style of governance of the BJP Union government, is that the “Leader” must never compromise on his invincibility and popularity. Prime Minister Modi is the most popular individual choice today. But even tertiary shocks to “invincibility” transmit foundational after-shocks, which could dent even his allure. 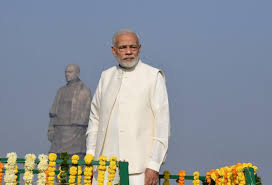 This is important because we do not directly elect a Chief Minister or a Prime Minister. We vote in Members of Parliament and Members of Legislative Assembly. At best they are a proxy for the “Leader” who would form the government, if their party gets a majority. A fuzzy way of voting in a leader. A bit like betting on how many gold medals India will win in the next Olympics and then having to cheer on every member of our Hockey and athletics team to win the bet.

The predictability of Bhen Mayawati’s supporters

Not everyone is as fortunate as Bhen Mayawati who can “transfer” her supporters vote to any candidate or party of her choice. For the voters the intermediaries are insignificant. The dedicated cadres of the Rashtriya Swayamsevak Sangh are no different, although their discipline is rarely tested by requiring them to vote for and support any candidate other than the BJPs.

Narendra Modi is the person most likely to helm the BJP, whether in government or in opposition, post 2019. It is wishful thinking, on the part of those who would rather see him go, to imagine that the BJP would junk him in 2019 if they have to sit out in opposition. How long for would depend on the strength and sagacity of the coalition government which is voted in. But should an opposition coalition survive till 2024, there would be a face-off between Mr Modi and the BJPs heir apparent Yogi Adityanath, who currently helms the Uttar Pradesh government. But consider, if the BJP cannot stitch together a majority in 2019 would not the law of consequences apply making them unable to win Uttar Pradesh assembly elections in 2022 thereby leveling the losses of the two BJP leaders.

It is even more wishful to believe that Mr Modi would take sanyas at the young age of 69 should the BJP fails to form a government in 2019. He is a fighter, an accomplished organiser and chameleon-like, in his ability to play the part per the script and the circumstances. 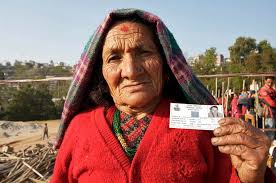 In the face of this complex framework of intended and unintended consequences what should the Indian voter do? She has three options.

First, vote from your conscience – not easy unless you are a very politically committed person. The ideological lines across parties are so blurred.

Second, if you conscience is not that well-formed, ask a friend. After all if you can call a friend to become a crorepati why not also vote on the basis of derived trust?

Third, if you must know your party inside out and be certain of how they would behave once in power, your only choice is the Communist Party of India – Marxist. Only problem – they fielded 93 candidates in 2014 against 541 Lok Sabha constituencies, so you might not find a candidate in your constituency. Even if you do, they are so ideologically inflexible that they might refuse to work with a coalition government, as they did in 1996, thereby depriving the late Jyoti Basu a shot at being Prime Minister.

The good news is that the law of unintended consequences will always bail you out over time. The BJP waited for 18 years before they could form a government in 1998 under Atalji after an aborted short-lived attempt in 1996 and came back for a full second term in 1999. So, take heart, you can’t be on the wrong bus forever.