So hotly are the elections being contested that it is easy to forget the real life challenges awaiting the new government. Challenges come in three buckets — institutional; policy design and uncertainties from external and domestic shocks. Poor policy choices are easily reversed, institutional change happens slowly while shocks can neither be forecast nor fully insured against.

India follows a set of foundational policy principles including the sharing of powers between the Union and states and respect for human rights and freedoms. Disagreement and divergence occurs whilst devising the second order actions to implement bedrock policies.

Cookie-cutter policies need to be tweaked to achieve results. Take the liberalised policy on land acquisitions which faces implacable resistance nevertheless. But recent land acquisition for developing the area around the Kashi Vishwanath Temple in Varanasi met with no resistance because the rules were tweaked to pay compensation at more than the market rate. The result — higher upfront cost but speedy implementation with avoided project delay costs.

This pragmatic market-based approach should be institutionalised through explicit political decisions for contentious economic matters — auction of spectrum or natural reserves and privatisation of public sector entities — where decisions get delayed because of the fear of the 3Cs (CVC, CAG and CBI).

Acquisition of the Rafale fighter aircraft is another example where the urgency of security considerations set-off any possible gains from dilatory process compliance. The three Cs must upgrade their forensic skills to evaluate results contextually rather than the unhelpful process audit they excel in presently. The demands of process must not override bold decision-making in public interest.

The UPA government used the mechanism of a group of empowered ministers with a similar objective. This partial application of the principle of collective action was expanded to pan-Indian cooperative federalism for forging an agreement in the GST council consisting of state level and Union ministers. The logic is simple. Such fora mediate views between the states and the Union, on an equal footing, far more effectively that the ritualistic annual meeting of the National Development Council in the pre-2014 era.

Tricky contractual and legal barriers to desirable executive action; process obstacles and the executive’s understandable fear of becoming the “fall guy” can be mitigated by institutionalising two new federal councils consisting of the Union and all the states.

Federal negotiation and consensus – the best option for policy stability

First, the GST council should be converted into a “Fiscal Council” with two subordinate Commissions. A standing “Tax Commission” to rationalise and reduce the GST rates; include petroleum and liquor in the GST regime to prevent tax gouging by states and formulate pan-Indian frameworks for customs, direct tax and state level taxes.

Till now the Finance Commission has defined the inter-state fiscal compact. But a quinquennial body is out of sync with the demands of a dynamic, digitally connected, open economy, particularly whilst dealing with shocks.

A standing commission on macro-economy could define debt sustainability levels —public debt has exceeded 80 per cent of GDP; money supply, credit policy and frameworks for regulation of financial intermediaries and markets, whilst respecting the functional autonomy of the financial regulators — RBI, SEBI and the insurance regulator.

Resuscitating the Planning Commission is not the answer

There have been nostalgic calls for reinventing the erstwhile Planning Commission. It has left an unfilled hole. But re-dredging the past is unnecessary. The key is for the Union government to recognise that it is just one of the 30 other government bodies, albeit primus inter pares. We must abandon the Raj style top-down administration and transit to a federated form of high-level decision-making. The Indian growth story has been plagued by misallocation of capital, unaccountable governance and very high transaction cost because of silo functioning.

Revitalising agriculture is the foremost economic challenge. Failure to do so reduces our annual GDP growth of 6 to 6.5 per cent by 0.5 percentage points. It also perpetuates the regressive social dominance of extractive Kulaks — agricultural elite — who block reform because they garner the bulk of the subsidies from cheap irrigation, fertilizer and credit; low electricity cost and high minimum support price for crops, together amounting to more than 2 per cent of GDP. Severe inequality in the allocation of public finance is a primary reason for rural impoverishment.

Income support schemes – the Congress’s Nyay for 20 per cent of the poorest households and the BJP’s PM Kisan scheme for farmers with less than two hectare of land, are both progressive social protection measures.

The sustainable way to finance them is by ending the existing poorly targeted and leaky administrative pricing of agricultural inputs and food supply, except where markets don’t exist. Only a pan-Indian political consensus can negotiate a trade-off with the Kulaks by showing them that a suite of reforms — full decontrol of agriculture from marketing constraints and export prohibitions; legalising land leasing; liberalising retail marketing arrangements and enhanced public investment can benefit them far more than the subsides they enjoy today. This compact can only be negotiated in a federal council with all states present as equals.

Resilience against economic and climate shocks

What about economic shocks? We had several over the last five years including a reversal in cheap oil from June 2016 onwards; in 2017 the self-goal of demonetisation and the associated shock from GST implementation. Looking ahead, oil prices shall remain volatile.

Delinking transport and captive electricity generation from the oil economy is two decades away. In the meantime we must build resilience to market and climate shocks.

Making the economy drought proof requires investment in irrigation. Ashok Gulati, India’s foremost agricultural economist, notes that of the 99 planned irrigation schemes under the Prime Minister Sinchai Yojna, only six are providing farmers in the command area with water. The slogan of “more crop per drop” has remained just that. Wasteful use of “no cost” irrigation continues unabated, as does plunder of the falling levels of ground water. 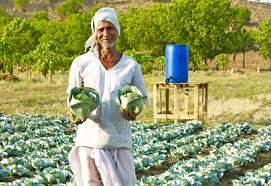 The BJP targets investing Rs 25 trillion in rural areas over the next five years. But the 2019-20 budget allocation at Rs 80 billion (0.04 per cent of GDP) is merely 1.5 per cent of the Rs 5 trillion required. Whilst, state government and private investment are additional the gap between rhetoric and reality remains substantive.

At the heart of the investment debate is whether we can reduce our revenue spend and increase capital allocation for core areas — defence, agriculture and rural development and infrastructure.

Currently the Union government spends just 1.5 per cent of GDP on capital investment but pulls-in an additional 3 per cent of GDP (Rs 6.1 trillion) as extra budgetary resources from state owned enterprises.

Such off-budget financing almost equals the budgetary deficit targeted at 3.5 per cent of GDP. The problem is off budget financing is non-transparent; violates corporate governance norms and it’s cosy circularity between SOEs, publicly owned banks, insurance companies and pension funds hides red flags and can cause systemic instability.

India is not an unstable economy. But it cannot sustain the fiscal pressure of enhanced social spending — necessary for reducing inequality and the lack of productive jobs — without hurting public capital investment. Doing so pushes us into a downward spiral of reduced potential for growth; reduced public capacity for social welfare and lower private investment.

Over the next five years of global trade disruptions and oil volatility, climate change related shocks and technological disruptions, the Union government must maintain fiscal prudence, substitute administered pricing with direct beneficiary support, work cooperatively with states to reduce transaction costs — project overruns, red tape, rent seeking, shun prestige projects for selective bang-for-the-buck investments, reduce investor risk and controls to enhance foreign and domestic private investment and substitute 1.5 per cent of GDP of wasteful revenue expenditure with enhanced public capital investment to prepare for the biggest economic shock by 2030 — the net loss of “good” jobs globally. We are under siege. Make no mistake about that.

Adapted from the author’s opinion piece in the Asian Age, May 20, 2019 https://www.asianage.com/360-degree/190519/bitter-morning-after-pill-for-new-govt-post-elections.html