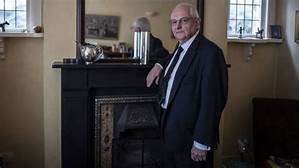 Martin Wolf CBE is best known for being, since 1996, the Chief Economics Commentator at the prestigious Financial Times (FT) newspaper published from London since 1888 on distinctive “light salmon pink” newsprint.

The Financial Times – news for the well heeled

If you hire a Rolls Royce, to take you from Heathrow to your budget lodgings in East London, you are likely to find the FT at hand to amuse you with the global financial goings-on, even as you sip your choice of drink without getting your lips wet.

The FT claims to reach 36 per cent of the wealthiest decision-makers as against the Dow Jones-owned Wall Street Journal which does 10 percentage points worse. Even yesterday’s copies remain valuable as public symbols of the readers rarified tastes. Back home in India, grey heads and beards, nod and fight over getting to the FT first, in the hallowed precincts of ancient libraries like at the Indian International Center, New Delhi.

But Wolf wasn’t always on the “pink salmon” gravy train. He worked with the World Bank for two decades till 1981. Reportedly, he left because the Bank was doing too much of what developmental banks are supposed to do – lend money to economies which need it the most – read Developing Economies, which sadly however have no incentives to sip their loans genteelly. In the absence of downward accountability, they gulp down whatever is on tap resulting in burps – like the infamous debt crisis of the 1980s.

In Africa, every new World Bank staffer is still accused of personally causing the debt crisis and must ritually apologize for her existence and the past excesses of her employer, before the Ugalli – a ubiquitous maize meal- is shared and it becomes “Hakuna Matata” or business as usual again.

Wolf recognized early that a bank career lending to unresponsive compromised developing country governments could fast become an endgame. He did the best thing, He left and resurfaced as a journalist with the Financial Times in 1987 and it is here that he found his karam bhoomi (destined land).

The ideological shift from a workplace imposed left-liberal, public finance-led, global development ideology to greasing the wheels of private finance and entrepreneurship seem to have suited him well, given his early instincts to shun “The road to serfdom” a la Friedrich Hayek.

Success followed, making him a prominent influencer of global financial directions. Per Wikipedia, he is “staggeringly well connected”. His friends include leading financiers such as Mohamed A. El-Erian and politicians such as Manmohan Singh. Lawrence H. Summers called him “the world’s preeminent financial journalist”.

2008 – Make-over from Free Markets to the socialisation of private losses of those “too big to close” in the name of “global financial stability”.

Wolf’s reputation as a financial pundit is built around his becoming a prominent advocate of the “inflate and survive” shock therapy which was adopted so successfully to save the over-lent, undercapitalized, global financial system from permanent damage between 2008 to 2010. The world got over the ensuing debt pileup. We are still snowed under – though Mr. P. Chidambaram has a different spin on when the pile-up happened.

Ironically, it was Keynesian public finance dollops – an approach he had shunned since 1981 for the free markets and private sector-led growth strategy – which floated him to prominence in 2008, even as Hayek’s Libertarian economics receded from his quiver of arrows.

Since 2000 a staunch votary of globalisation

Wolf was a prominent voice for Globalization. A decade later – as searing inequality reared its ugly head, a consequence of globalization – the middle class floundered with stagnant incomes even though the uppermost decile garnered increasing shares of income and wealth and those in the bottom two quintiles also see welcome income enhancements courtesy greater formalization; a  shift from agriculture to services and significant improvements in public services and social protection. Is it time yet again for Wolf to switch hats?

A crisis in “democratic capitalism”

This is what was uppermost in my mind as I listened to him sketch out the contents of his new book in a talk titled “The crisis of democratic capitalism” delivered by him at the Brookings Institute in New Delhi to a packed lecture theatre. Sadly, I got no answers to the vital question whether it was time to run from democracy or indeed also from capitalism to nationalism?.

Bhalla volunteered the information that over the past several decades he has agreed with almost everything Wolf has said or done which sadly disqualified him as an objective discussant. Mehta – an experienced seminarist – was more circumspect. He chose to question the framework of the Woolf proposition.

The black and white choices between democracy, national sovereignty or global capitalism offered by Wolf, copying from a proposition of Dani Rodrik – a Harvard economics star – that it is impossible to combine more than any two of the three concepts harmoniously – seemed as unreal as the economic buoyancy of the US despite the serious political crisis it is navigating. Ok. He didn’t quite say this. But I am.

Surely, said Mehta, these three mega concepts are more nuanced and contextual than they are being made out to be. Capitalism with Chinese characteristics is a different and far more vital animal than the capitalism of General Motors – my words not his. He is a very polite person.

Whilst trying to imagine the future it is better to uncover the atomic structure lying beneath these broad concepts rather than to deepen understanding of the broad relationships between democracy, nationalism and global capitalism

Understanding how parts of the whole can be manipulated to opportunistically manage our uncertain future rather than a grand, necessarily static theory based on backward looking assumptions, prescribing a unique, perfect future world.

Journalists and economists, even the best, need to be humble whilst looking ahead. Surfing a wave successfully, even repeatedly, is very different from creating one.

SORRY( UPDATED February 24, 2020) The opinion piece was published with Mr Wolf wrongly referred to as Mr Woolf – the author apologises deeply for confusing him with the Bloomsbury gang. The error was unintentional and not meant to evoke humour.