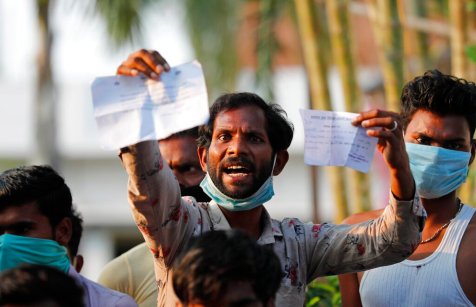 It is difficult not to eulogize the lonely migrant worker trudging his way home on deserted locked-down highways and sometimes not reaching his destination.

Some of this is guilt because of the economic and physical hardships they are suffering. They have tugged at heart strings by risking death or injury just to get back to the familiarity of home and their family – how can anyone not be moved by that?

Migrants- One of the engines of urban economic development

Migrants are the unsung heroes of India’s growth story. 50 million out-of-state migrants keep factories, construction sites and retail outlets humming and adding value in cities, often at absurdly low wages and live frugal lives to save and remit cash to their families.

The source of domestic migration is the fragmented structure of agricultural land. Sale of land is prohibited if it is held on lease from government under the Zamindari abolition and land re-distribution regulations implemented during the 1950s.

Ceilings on land ownership constrain farming at scale. Convoluted regulations on changing the usage from agriculture to housing or industry, depress the market price of agricultural land and encourage inspired bypassing of regulatory constraint including benami or shadow ownership.

The in-between world of small farmers

Truth be told 78% of farmers are marginal or small. They own below 5 acres which accounts for 33% of agricultural land but produces 41% of food. Marginal farmers who own less than 2.5 acres, eat what they produce. Economies of scale militate against even small farms being worthwhile for cultivation, especially if there is no assured source of irrigation, the quality of the land is poor or if it in the flood plains.

This is not to say that “small” can never be as productive as large. It can. ( FAO 2002) But only with lots of love, care, money and technical expertise. However, the net cash returns even at a productivity of 2.5 tons of wheat per 2.5 acres sold at an MSP of Rs 1800/- per quintal is less than one-twentieth (after deducting input costs) of the Rs 100,000 a migrant worker earns per year in big cities. Of this 75% is sent back to the family. No wonder then that an estimated 50 million cross-state border-migrants from rural areas live in cities.

Farms ideal for raising a family – if public services improve

Small farms might not be viable. But they are ideal locations to raise families given that the “joint family” support system is still alive and well in rural India.

The caveat is public services must improve – health care, education, sanitation, drinking water, electricity, internet and all-weather road access. Above all else, a robust law and order rural administration is needed to insulate rural folk from caste wars, communal wars and the petty “zulum” (tyranny) by the mafia-administration-politico combine.

PM Modi is moving towards equalising India and Bharat

To its credit, the Modi government has ticked all the right boxes. Post-Covid, public health infrastructure is receiving a boost. Parmeswaran Iyer the ex-IAS, ex-World Bank development professional – the “face” of PM Modi’s sanitation drive – is now also in charge of drinking water in the Union government, which augurs well for the success of the drinking water mission “Har Ghar Me Jal” – a water-tap in every house for all by 2024, at a promised outlay of Rs 3.5 trillion.

We need to hang onto this vision of the rural as “home” and the city as a “workplace” to reflect the realities of India. Over the last two decades, elitist, vested interests, have diverted development resources to urban areas, which are touted as golden networks of modern enterprise, innovation and unrivaled value addition pulling India into the upper echelons of global “GDP achievers”.

Cities should live off their own earned wealth

The unanswered question however is, if cities are truly value-creators, how come they cannot finance their own growth through local taxes and the inter-governmental transfers they receive?

The price of urban property spiraled by 8X since 2000 but property taxes have remained dormant as a source of revenue. Data on municipal taxes is dodgy and irregular. Estimates suggest that against an average of 0.7% of GDP in developing countries India collects only 0.2% of GDP as property tax M.Govinda Rao 2013 NIPFP In thirty six large municipalities during 2003-2006 the property tax collected was just Rs 436 per capita per year. Also, collections grew only by 8% per year versus nominal GDP growth of 14% during this period – illustrating the steep, virtual tax discount for the propertied classes.

But it does not end there. Urban domestic electricity and water supply is heavily subsidized sapping tax revenues. Grants in aid under “The Smart Cities” program from the Union government poured in Rs 500 billion into just 100 cities over the last five years. This amounts to a privileged allocation of around Rs 2500 per capita from the Union budget for just 15% of the population.

An uncertain future for urban work

Network advantages and tax breaks together make cities magnets for private investment and skilled workers. The future and direction of urban work has become even more uncertain post Covid-19. Social distancing compliant robots will increasingly compete with wage labour in cities. India needs to prepare for the worst.

Creating permanent in-house worker colonies in urban industrial areas as has been suggested by the Finance Minister will come at extravagant cost given the high price of land. Our model of cross state boundaries seasonal mobility for work closely follows what China does. It remains a viable transition strategy to keep labor costs low in cities and the urban engines of growth humming.

Migrant welfare must be directly administered by the Union government so that they never again fall between the cracks as they did during Covid-19. We have an entire department for Non-Resident Indians! How about a Union department for the numerically higher cross state border migrants?

Every migrant must have the option to be bio-registered with the Union government for issue of a migration certificate which would facilitate portability of his vote and benefits. This is necessary if ESIC and PF benefits are to be extended to workers in the unorganized sector as the Finance Minister has announced.

We must never forget that the heart of India beats in its villages. We need to support much neglected, “Bharat” with budget allocations proportionate to the 890 million Indians who call it home.