Posted on December 9, 2013 by Sanjeev Ahluwalia 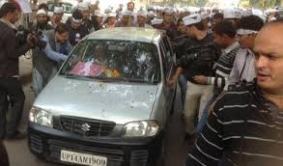 The citizens of Delhi are a spoilt lot. They pay the least in taxes relative to income (the highest in India and three times the average national income) and get the maximum subsidies and facilities from the government. The expenditure for the current financial year 2013-14 is INR 24,000 per person, the bulk of which is grants received from the kind central government. It seems that even this is not enough to get re-elected. In this respect Delhi illustrates the demands that modern democracy imposes on politicians who are forced to desperately try riding the never ending escalator of expectations. Five lessons emerge.

First, there are limits to pork barrel politics, the staple of the “traditional” parties. This limit is quickly reached as population growth outstrips the increase in resources. Population grew at around 3.5% per annum since 1990 (with growth slowing in the decade since 2001), primarily through in-migration of the poor and marginalized from the hinterland. In comparison, the additional public resources required to raise the quality of life of the immigrants (infrastructure, basic services and jobs) are far more than the taxes in-migrants contribute. Under conditions of fiscal stress, the level of pork available stagnates or declines and people have to pay for improved public services.

Second, expectations always outstrip the reality unless people are made to recognize that there is a cost to better services. Someone has to pay for 24X7 good quality water and power supply, efficient public transport, roads and drains. In this context, the new electoral promises of sharply reducing the cost of power supply or a supply of free water, in limited volume, are highly misleading and irresponsible. A subsidy driven world is just not sustainable.

Third, whilst the leitmotif of the day is corruption-free politics, the real underlying sentiment is for better service delivery. International experience suggests that diluting corruption is a complex task which has much to do with social norms and capital. Better and transparent public management systems also help by reducing babu discretion and limiting the “corruption envelope”. But the world is littered with state-of-the-art public management systems (usually funded by obliging international donors) with no perceptible dent on corruption. It is only if a corrupt person becomes socially tainted that disincentives for corruption, kick in. Social sanctions for the corrupt are noticeably lacking in the National Capital Region, which has prospered, over the last two decades, on the back of cheap loan finance, speculation in real estate and massive public spending, all of which are riddled with corruption.

Delhi voted for the unknown Aam Admi Party (AAP) candidates, purely because they were not party to the small club of “regular” politicians who have bonded, across party lines, in the heady miasma of the power elite (politicians, bureaucrats, journalists, businessmen, publicists and sadhwis) over the last six decades.

Fourth, Delhi rejected the role of political parties in democracy, by voting significantly for the unknown AAP candidates. This calls in question the relevance of this model of democracy, based on political parties, as an instrument of reform. Political parties serve the purpose of aggregating common interests and political power. The problem is that the process of aggregation itself breeds the rot of gradually losing touch with who is the boss. Anna was right in warning against the debilitating dangers of joining the political game.

Today, the AAP aims to play the role of a constructive opposition keeping the BJP on the straight and narrow path. This is a worthwhile, but narrow, parliamentary agenda but it fails to disrupt the political process, which created the “traditional” political party system, with all their ills.

A more fundamentally productive agenda would be to change the structure of politics in Delhi by pursuing the three principles of good governance: Transparency, Access to information and Participation. These principles need to be applied to (A) devolve powers to the level best suited to exercise them and to bring the decision making process closer to the people; (B) introduce third party monitoring of public expenditure and (C) implement a transparent compensation policy for Delhi State politicians and babus; provide a generous house rent allowance instead of government houses, which should be auctioned; provide a car and driver allowance instead of government cars; bind Ministers and Secretary level babus to publicly available annual and three year work agreements with specific targets.

AAP would waste this unique opportunity if it was to focus purely on a parliamentary agenda and abandon its tentative efforts at social transformation. Equity considerations indicate that per capita spending, across wards, should be mapped and disclosed. This is likely to reveal the massive skew in favour of the rich. Other developmental goals should be to (A) privatize water supply and sanitation with the intention of improving access and the quality of supply, including by levying user charges; (B) publish all public contracts; (C) rapidly expand public transport including by contracting-out road transport to private companies-the killer blue line services were a product of the structure of the contract rather than any lack of interest from the corporate private sector; (D) work with Haryana and UP to evolve a common, suitably heavy tax on the use of private vehicles, especially luxury cars.

Lastly, Delhi has voted unequivocally for more jobs. Whilst support from the AAP has come from a cross section of citizens, fed up with status quoist political parties, much of their appeal is to the poor and the unemployed. Poverty reduction is clearly less about providing subsidised food, fuel and water and more about providing productive jobs. In this the Delhi government is likely to be hamstrung by its fractured mandate but the first step must be to adopt a job creation strategy through a consultative process.

Kejriwal and his colleagues have lived up to their promise to be “disruptive innovators” with the intention of shifting the existing political equilibrium to a higher level. They have done so by following the twin paths of Gandhi’s strategy of voluntarism led social mobilization and the change opportunities offered by parliamentary democracy. They must now work hard to avoid becoming “destructive” change agents.

5 thoughts on “The New Politicians”