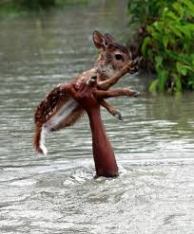 Can accidents be completely avoided? Can our environment be monitored; analysed and controlled to make everything predictable? Astrologers will tell you they have been doing exactly this for ages. Not everyone believes them.

An astrologer has predicted that India’s next PM will be a bachelor. This had raised the hopes of Rahul, Bhenji, Amma, Didi and Naveen Patnaik. Modi has a wife and so clearly is not in this contest.

The BJP- India’s Hindu party, the one supported by “fundamentalist Hindus” and backward sadhus and sadhvis- oddly does not seem to believe in Astrology. They decided to go with Modi despite knowing that he was not strictly a bachelor. Possibly, the BJP has other in-house Astrologers who do not agree with the first prediction. But then that calls in question the science of Astrology itself, if practioners disagree on outcomes just two weeks away.

Medical “science” is no different. It junks homeopathy as being theoretically indefensible. But it has no explanation of why Buddhist lamas can die “clinically” and yet remain “alive” in the Lotus posture in which they died, with no decay of the body for years, till they decide to “leave” it. Modern science is far from the frontiers of certainty.

What about parenting? How long should you shield your growing children from risk and uncertainty? Indian parents go out of their way to protect their children as long as they are physically and financially able to do so. This is how they themselves were brought up. In a closely controlled and rigidly stratified environment this is possible. But in an “open” environment, where innovation is key, the past presents very few lessons for the future because the future bears no resemblance to what has happened. IBM did not know this and where are they today?

In the financial world, bankruptcies happen to the ”best” companies. They also result in better companies prospering against the inefficient ones. In India we still do not let companies die. We protect banks and large corporates from the risk of bankruptcy. “Industrial reconstruction” is the name of the game. It doesn’t work. Instead, such protection creates a culture of weak and fat companies like Air India and Kingfisher. These companies, which gorge on the tax payer’s money, the equity of minority investors, who are foolish enough to invest in them and our money saved in Banks, bur negligently lent to such companies as for example Bank of India. The lesson is that death, sometimes by accident, should not be averted beyond a point.

If there were no accidents and we had absolute certainty, there would be no progress, only the stillness of the grave. An apple accidentally fell on Newton’s head which lead to the theory that in the absence of balanced, countervailing natural forces the world would explode/implode.

Can there be reward without risk? The trick lies in drawing the line between the two sensibly. Merchant bankers, private equity managers, political pundits, businessmen, doctors, human resource managers and teachers and know how to balance risk and reward. For this core skill they are compensated handsomely except GP doctors, HR managers and Teachers. All three cater to the human mind more than to the dry dictates of their discipline. But science is increasingly making them redundant by progressively degrading the value of basic human skills. It is substituting human skills with more efficient machines at an alarming rate. Driverless cars and pilotless airplanes; robots on the production line; robots in shops and soon robots in the home; robots for ground level surveillance; drones in the air.

On the flip side science has also progressively reduced the risk from accidents for humans. People live longer and healthier lives but whether net productivity has increased as a result is debatable. A rigorous analysis of net economic growth after accounting from the environmental loss from negative externalities has never been done systematically in any country. It was tried in China in 2005 but quickly abandoned when the high economic growth rate got reduced to zero in some provinces.

The problem with not accounting for natural resource use is similar to a consumer overusing her credit card. For such feckless consumers a “debit card” which deducts the bank balance for every use is better. Green GDP accounting applies the “debit card” discipline to countries.

Seemingly “riskless” economic and “quality of life” benefits encourage wasteful use of resources because they appear “costless” in the near term. Climate change is an outcome of our successful endeavor to cocoon humans from want, disease and death. This has increased population to unsustainable levels. It has also made the rich across the world highly resource intensive. Delicate lives require air conditioning; motorized transport; communication networks and vast quantities and varieties of food, all of which degrade water sources, air quality and the biosphere in which we live. Bottled mineral water for drinking; gallons of water for endless showers; swimming and golf courses have made us water addicts. Our rivers and seas, air quality and land degradation can be directly related to the pressure of a growing population and an increasingly unsustainable lifestyle.

Upgrading all 7.2 billion of us to the average quality of life of the top quintile would either require a quantum leap in clean technology to outpace current population growth or very quickly degrade us to destruction. Paul Ehrlich (The population bomb. 1986) posed this question. Half a century on we still face the same conundrum.

More people live in degraded environments today than in 1965. Whilst the “environment hot spots” of 1965 in the industrialised countries have been cleaned up, the “hot spots” have shifted to more populous locations in developing countries. In 1955, air pollution was the biggest killer in Texas, US. Today smog from burgeoning automobiles and factories is the killer in Beijing. If rivers were fetid in the 1950s in the US, the Holy Ganga River is a cesspool today in India. Despite huge advances in technology since 1965, we still do not know how to give 7.2 million people the minimum acceptable standards of life within the available resources.

Economic theory tells us a young population is a demographic dividend. What it ignores is that barriers to international migration for the young into the rich world, severely limit the world demographic dividend. Meanwhile poor countries are unable to utilize the abundant volumes of young people available to them. They do not have the resources to push the young up the “skills ladder” faster than technology makes old skills redundant.

As a race we are increasingly unable to deal with nature. Modern armies have such a heavy supply chain to keep their soldiers healthy, well clad and alive that they lose out on tactical flexibility. They face the classic logistics problem Rommel faced in Africa with his tanks outpacing the supply chain. This is also why the US troops were no match for the Vietcong (1956-1975) and NATO troops have failed against the Taliban, in Afghanistan (2001-2014). Both the Vietcong earlier and now the Taliban, are comfortable living with nature and use nature to their advantage. The average GI from the streets of Kiryas Joel, New York (the poorest place in the US) does not have this advantage.

Accidents happen and they are a must if we are to keep growing. What we can do is to enhance our capacity to manage and deal with accidents.

As parents we have learn to deal with the inevitable misfortunes and misadventures of our children with fortitude.

As citizens we have to become resilient to destabilising political change by making government progressively less crucial for our welfare. We must take on the risks and responsibilities ourselves.

As humans, we need to drastically reduce our foot print on nature and learn to live with personal discomfort; the loss of loved ones and shifting fortunes with equanimity.

At the end of the day all anyone wants is to lie on the beach with a drink at hand; or get our lunch ourselves from the fruit trees, vegetable garden or the river next door. We must not fool ourselves into imagining that this idyllic life comes without the need to swat flies and mosquitoes; avoid snakes, rats and lizards or sans sweat, cold or fever.

The price of accidents is discomfort. The benefits are sustainable life. Choose wisely. How long can we observe nature through a protective plate glass?