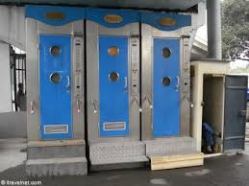 Public toilets are an emotive subject. The Gates Foundation has developed one which incinerates the waste using solar power; expectedly an innovative and green solution from the Big B of Silicon Valley. The Japanese have for long unleashed their geekiness on customizing digitally operated toilets to become so threatening that just trying to use one becomes daunting for the technologically challenged. But the king of public toilets, in India, remains Bindeshwari Pathak whose brain child “Sulabh” has, since 1970, provided public toilet comfort to travelers, itinerants, slum dwellers and the homeless; an astounding 15 million every day and growing.

Expectedly, therefore, whilst striking a blow for equity and protection of minority rights, the Supreme Court directed the government that Transgender (TG) be recognized as a third gender and provided with separate public toilets. A laudable objective in a country, where even the existing two genders and the “specially enabled” often “feel” the absence of a public toilet.

But much depends on the availability and quality of public options. Many public services do not have toilets segregated by gender; think airplanes or railway carriages or even small restaurants. It was only in 1739 that gender based toilet segregation became available in French restaurants.

The notion of separate public toilets for men and women is related to three cultural traits which vary across the world. First is the “prudish” trait which requires that physical contact between men and women be minimized, just as volatile chemicals are stored separately in laboratories, to avoid mishaps and misadventures from their inadvertent mixing. So separate queues for women in banks, separate buses, separate rail compartments, separate taxis and separate toilets.

Second, is the need for comfort and absence from sexual stress that flows from being with the same gender. After all one is at ones most vulnerable in the toilet and the successful completion of the task at hand requires one to be at ease and relaxed. So there is validity in the assumption that separate toilets for men and women are both more efficient and effective.

Third, is the need for assuring physical safety, especially of women.  A public toilet, by its very character, is shielded from public gaze. In addition, if it is unlit or located in isolated areas, as they often are, they become fertile ground for sexual assault and intimidation. Hence the need for separate toilets.

It is probably in this context that the SC directed a third public toilet for the third gender. The issue that arises is should toilets be segregated by gender (a physical attribute) or sexuality (a mental attribute).

Gay or Lesbian persons would probably choose to use the toilet of their sexuality rather than that of their gender on the grounds of prudishness, lack of sexual stress and safety. Unexceptional, straight people of either gender would probably agree with them on their choice. They probably feel the sexual tension if they are to share a toilet with a gay/lesbian person who only has a common gender with them but a different sexuality.

The key problem with using sexuality to determine which of the three public toilets to access, is that it is not discernible at “face value”. Gender being a physical characteristic is easier to spot but still needs physical examination. Also there is the issue of Bisexual persons who probably deserve a special toilet of their own.

The way to solve the gender/sexuality based toilet access conundrum is to use a proxy. This should be the way you are dressed. Irrespective of gender or sexuality if you dress as a woman, you should have access to the women’s toilet and vice versa for men. Transgenders could also be conveniently accommodated using this metric.

Of course this still does not solve the problem of the closet gay/lesbian persons who hide their sexual orientation by dessing according to their gender, because the law in India criminalises their sexual practices and social norms still discriminate against them. But that is changing. The Supreme Court is considering a curative petition which will likely overturn its recent regressive decision which passed the baton to Parliament to decriminalize “sex against the order of nature”.

Once this happens, the problem of the third public toilet shall have been solved. Everyone shall have access to the public toilet one dressed for, exactly as it is for entry into exclusive clubs and bars. You are only allowed in if you have dressed appropriately.

It is in the government’s interest also to fast forward legislation on decriminalizing gay/lesbian sexual practices and recognizing same sex marriages. Otherwise it faces the uphill challenge of adding a third public toilet to the non-existent two.