Facebook CEO Mark Zuckerberg’s pledge to give away 99 per cent of his shares in the company, assessed at $45 billion, is the most recent in a series of over 138 billionaires who have signed the “giving pledge” to donate 50 per cent of their fortunes to charity. The 500 top billionaires in the Forbes list have a net worth of $4.7 trillion. Donations to charity, in the US alone, amount to over $300 billion every year.

Compare this with the fate of the pledge to stop climate change, proposed at just $100 billion every year from 2020 onwards. The nations of the world are scrapping over who should pay how much. Nothing better illustrates the ascendancy of the “box wallahs” (big business) versus the public bankruptcy of nation states. 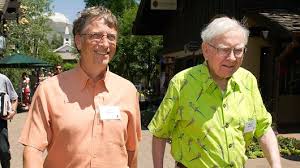 The leaders of 190 nations of the world and their extensive delegations could have more effectively sought an appoint-ment with the 1,826 billionaires in the Forbes list with a net worth of $7.5 trillion — equal to around 10 per cent of the world’s gross domestic product. With an estimated annual income of around $150 to $200 billion they could potentially make up for the international intransigence in funding the global commons.

Private wealth has always been a metric of success, especially if it is built up within one’s lifetime, if it is legitimate and if some of it is used to do good deeds. Could the talent, which has demonstrated private success, be institutionalised for achieving similar success in global public affairs?

This rhetorical question merits consideration because the governance record of multilateral institutions has been pretty lacklustre, particularly in matters related to promoting the global commons. And time is running out.

Cynics would assert that billionaires are created from unpaid taxes, which they are big enough to avoid paying, unlike common folk. Others may baulk at trusting rich folks with the world’s future — after all many have grown their private wealth at public expense — as is the case with oil, mining and tobacco companies.

Why trust those who don’t walk the talk?

But it sounds somewhat ridiculous that the heads of 196 nations should have more “voice” in managing our future than 138 billionaires who are willing to pledge more money to charity, than all these nations can collectively gather over the next two decades, to protect the global commons.

Big is not beautiful

Have we ballooned the functions of nation states way beyond what they can efficiently do? Is the nation state a “fit for purpose” entity for the new, integrated world order of this century and beyond?

It is conventional to think it necessary to limit the power of the state versus the human rights of citizens — a concept embedded in the principle of the rule of law. It is less conventional to think it necessary to limit the economic functions and fiscal powers of the state. The success of “developmental” states, like China, in sharply reducing poverty and spurring economic growth has bolstered the case for fiscally empowered, intrusive or “nanny” states. The world and India are rediscovering the virtues of public finance-led growth.

This is a sharp departure from the conventional wisdom, which prevailed from the latter half of the 1980s till the 2008 financial crisis, that private investment and management trump public finance options in effectiveness. The 12th Five Year Plan (2012-2017) — incidentally possibly the “last supper” for planning in India — reflected this earlier consensus by relying on private investment for around one half of the plan outlay. The definition of “private investment”, of course, was somewhat disingenuous. Loans taken by a private firm from a publ-ic sector bank were categorised as private investment. Today, such loans, particularly to private infrastructure developers, have turned sour and increase the non-performing assets (NPAs) of publicly owned banks.

Fiscally muscular, democratic states, with expansive public ambitions, are wasteful and inefficient. Their instinct is to throw money at the problem. This is always the politically safest option though it may not be the most efficient “value for money” alternative. Examples abound. Why is it easier to construct a village school building than to staff it with teachers? Why are public buses in Delhi, bought just five years back during the Commonwealth Games in 2010, increasingly seen on the roads in a breakdown condition? In both cases, a fiscal windfall — a central scheme or a high-prestige project — makes available the capital investment, but there is no link with sustainable revenues for keeping the asset operational over its useful life.

India’s electricity supply industry is another case in point. In the First Five Year Plan, large-scale public investment was the planner’s choice for rapid electrification. More than six decades on, distribution utilities — primarily publicly-owned and managed — have an accumulated loss of $50 billion despite two previous bailouts in 2012 and 2002. Sadly, even on the most easily achieved efficiency metric of transmission and distribution loss, only the private utilities and some public utilities in Maharashtra, Gujarat and West Bengal perform well. In others, between a quarter to one half of the energy input into the grid, never gets billed to customers.

The core developmental function of the government is to regulate by setting standards of performance and by financing the delivery of public goods and services, which the private sector would otherwise have no incentive to supply. In India, unfortunately, our first response is to propose the direct delivery of public goods and services via state-owned enterprises. This in-house option is often preferred as being less time consuming and more controllable. There is also the implicit comfort that no one gets punished for the inefficiency of the public sector. But officers rooting for private sector service delivery face the challenge of having to stand ready to be hauled over the coals for the slightest mishap.

If our concern is jobs and better service delivery, it is only private investment and management which can generate results. Open the gates to the innovative genius of public-spirited billionaires. Why look a gift horse in the mouth?

Adapted from the authors article in the Asian Age December 10, 2015 http://wwv.asianage.com/columnists/let-billionaires-save-world-605