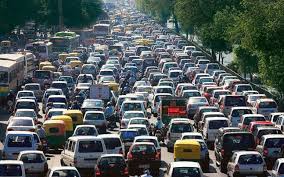 photo credit: indiatoday.com. How many 2000 cc plus private diesel cars can you spot in this randomly selected grid lock? Imposing a green cess on large diesel cars is populism at its worst. Less than 5% of private cars fall in this category and they have fairly competitive exhaust parameters because diesel engine technology has come a long way from the 1990s. The real culprit is the dirty fuel supplied in India.

The practiced ease with which the Supreme Court settled the Uttarakhand political snafu and restored constitutional propriety and federalism there, with President’s Rule being lifted, compares unfavourably with its dilatory proceedings on the use of diesel for fuelling cars in Delhi.

To recap, the Supreme Court banned the registration of diesel cars with engine capacity of and above 2000cc in December 2015 at the height of the smog scare in Delhi. Earlier this month, it tried to enforce its April 1 deadline for all taxis in Delhi to convert from diesel to CNG, but later backed down due to the economic dislocation it would cause.

The court’s association with the micro-management of fuel, technology and urban air pollution in Delhi dates back to 1993, when it acted on a PIL to clean Delhi’s polluted air. Thereafter, the government practically ceded ground to the Supreme Court as the prime mover for preserving clean air in the nation’s capital. Citizens still applaud its historic 1998 order making CNG mandatory for all public transport in Delhi.

The Supreme Court didn’t like diesel as a fuel then, and its views today remain the same, though the technology and circumstance have changed considerably. It is generally accepted that bringing Indian fuel standards on par with Europe is the best option to lower urban pollution from motorised transport. The government has plans to upgrade fuel standards to European levels (Bharat VI) by 2019. But the government lacks credibility in making such promises, given its past record. This implies the need to monitor how well the government is working towards that goal. 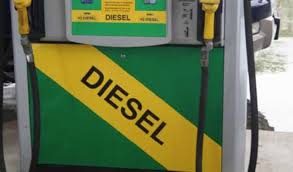 Globally, diesel has become the fuel of choice in the past two decades since the Kyoto Protocol on climate change imposed carbon emission targets on developed nations in the 1990s. Diesel cars produce considerably less carbon emissions than petrol cars, but have higher particulate and NO2 emissions. Improving the quality of diesel supplied — along the lines of city diesel, that is low-sulphur, clean diesel developed in Sweden — reduces the particulate and NO2 emissions to acceptable levels. This is what Europe has done. India can and should do the same.

In the short term, the Union government should equalise customs and excise duty on diesel and petrol. The Delhi government should do the same for value added tax. This will remove the artificial retail price advantage of 20 per cent enjoyed by diesel.

The fatal preference for diesel versus petrol goes back to our ersatz socialist past, when the lazy rich drove petrol cars while others used tractors, agricultural pumps, buses and trucks running on diesel, which was thus subsidised.

All public transport has converted to CNG and there is negligible agricultural activity in Delhi. These are ideal conditions for scrapping the preferential tax structure on diesel.

Correcting a tax-based market distortion will not attract eyeballs, nor does it appear as high-minded as imposing a “green cess”. But this is the right thing to do. Expenditure on fuel comprises around 25 per cent of the life cycle cost of running a car. So getting the price of fuel right is a key step to change consumer preferences. If a litre of petrol comes at the same retail price as diesel, much of the demand for diesel cars — particularly in the sub 2000cc segment — will simply vanish.

Green cess on large cars- populism at its worst.

The wrong thing to do would be to put a “green cess” on the registration of large, private diesel cars in Delhi as the Supreme Court seems to prefer. First, if a “green cess” is to be imposed, then in the interest of equity, it should be imposed on all “polluting” passenger vehicles that are not fueled by CNG or electricity.

Second, prescribing engine capacity as a metric for punitive taxation encourages gaming. Manufacturers will go marginally under the radar by “cheating” on capacity calibration with no benefit in emissions.

Third, imposing a selective “green cess” on engine capacity rather than emissions, which is a better, albeit easy to cheat metric, can be misread as populism and just bleeding the rich. Large diesel cars are just around five per cent of the car stock in Delhi. The cheapest large diesel car comes at a price of `20 lakhs-plus on the road. Of this, 45 per cent is tax and other government levies collected by the Union and state governments. Budget 2016 imposed an additional cess on large cars on top of the existing high excise duty.

If the intention is to penalise the use of large cars per-se — defensible environmentally on multiple counts — then the green cess should be imposed on all large motorised vehicles and not just diesel cars. The excise duty structure does that already. Excise duty on large cars is three times higher as compared to the duty on small cars. The real question is why make large cars unaffordable? What are the economic consequences thereof on jobs and economic growth versus the environmental benefits?

Going back to ersatz socialism?

Prior to the 1990s, the government used to dictate to industry what to produce and thereby constrain consumer demand. The government abandoned its policy of invasive ersatz socialism for good reasons. Why revisit a model which penalises wealth creation that is rightly dead and buried?

There was never much to be gained from this ban in terms of cleaning Delhi’s air even in the short term. The bulk of air pollution is from point sources other than diesel cars. Aggregate pollution from motorcycles and scooters that run on petrol far exceeds the pollution from cars. Dust, agricultural residue, industrial stack emissions and soot from coal comprise the bulk of particulate emissions.

Citizens welcome judicial activism in the supply of public goods like clean air as the government routinely failed to provide them in the past. But all governments are not the same. Should not the principle of “judicial forbearance” prevail till a government fails? Let the government do its job. But keep a sharp eye out for citizen rights. Economic policy is about experimenting with trade offs, across multiple objectives and options, for which the law provides no real answers.

Adapted from the authors article in Asian Age May 17, 2016 http://www.asianage.com/columnists/don-t-demonise-diesel-955