June 3, 2016 things reach a head in Mathura, a pilgrim town two hours by road from Delhi towards Agra. 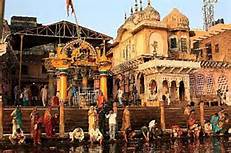 The hot spot is a 200 acre plus public park, occupied in 2014 by a set of criminals and land grabbers, masquerading as social revivalist and curiously, political anarchist associations camps in the public park on their way to Delhi, from Sagar in Madhya Pradesh, to demonstrate against the Union government policies.

Lord Krishna’s land seems attractive to them. The land-rich public park even more so. They dig in and grow in numbers over time to around 3000. They establish a self-ruled colony – as most slums are- under the nose of the District police office. They play the political game to resist eviction, even thought the town residents want them out. The local police, ever hesitant to take strict action per law, least they upset the apple cart and displease someone important in Lucknow or Delhi, play possum. A convenient route for inaction is found. Register a Public Interest Litigation with the Allahabad High Court. The expectation is that the case will drag on for generations. Meanwhile the status quo can be preserved. 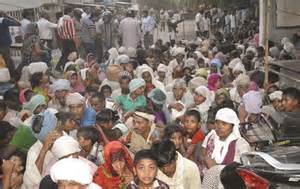 The massed “human shields” behind which the land grabbers hid photo credit: despardes.com

The Hon’ble High Court refuses to play ball. It swiftly orders the eviction of the interlopers. Cut to a young, conscientious, police officer – Mukul Dwivedi, Superintendent of Police (City) who leads from the front. Santosh Kumar Yadav, the Station House Officer of Farrah is with him. The task is difficult. The interlopers are armed to the teeth- guns, bombs and full of bravado. The police is aware of their arsenal. But they make the fatal error of underestimating the determination of the interlopers.

The police force is met with bullets, bombs, bursting gas cylinders and mayhem and is brutally beaten up. The SP dies from his wounds. The SHO is shot dead. Scores of policemen are injured. More police forces arrive. They retaliate with bullets. 22 interlopers are shot dead, beaten up or burnt to death in the ensuing melee. 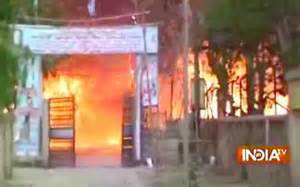 The blame for letting the situation get out of control is, as usual, put on the local police and district administration. Indeed they are to blame, because they had the powers to evict the interlopers long back, but did nothing.

But the price in blood is paid by the officers on the spot. The state government awards each of the families of the two police officers callously murdered, a grant of Rs 20 Lakhs each. Jobs for family members follow. The healing touch is applied to the living.

The real question is, what has the incident done for the image of the police and their morale. No one wants to die in vain. Mukul Dwivedi and Santosh Kumar Yadav would gladly have given their lives, if by “giving up their today they could build a better tomorrow for their colleagues in the police”. But have they?

Read the anguish expressed in a characteristically mild manner letter of condolence (below) by the officers recruited in 1980 to the IAS, IPS, IFS, IRS, IC&ES and the IAAS  via the common UPSC examination. Most (including this writer) have retired. Those that still serve do so in leadership positions in the Union government and state governments. Other than the cohort camaraderie, what this group of 67 shares is despair, that the civil services should have come to this- where institutional inaction imperils their very lives.

We, the serving and retired officers of the 1980 batch of the AIS and Central Services Group A, deeply condole the untimely and violent death of Shri Mukul Dwivedi, SP (City), Mathura and Shri Santosh Kumar Yadav, SHO, Farah, Mathura.

We strongly condemn the perpetrators of this murderous assault on police officers performing their duties. We hope that an enquiry will swiftly identify the culprits and ensure that they are punished under law.

These brave officers have paid the final price in the call of duty to implement the orders of the Hon’ble High Court of Allahabad, in difficult circumstances, which were out of their control.

In doing so, they have held high the tradition of “service before self”, with courage and dedication and amply displayed their deep commitment to maintaining the Rule of Law. They have made us all proud.

Please convey our heartfelt grief to the families of the deceased police officers. We all stand with them in their hour of deepest sorrow.

We are also contributing Rs 50,000/- directly to each of the families of Shri Mukul Dwivedi SP (City) Mathura and Shri Santosh Kumar Yadav, SHO Farah, Mathura as a small token of our respect for the supreme sacrifice made by these two brave hearts.