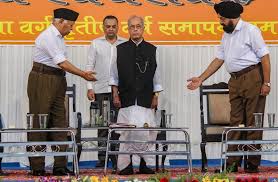 The brouhaha over Mr Pranab Mukherjee’s visit to Nagpur, as the chief guest at a valedictory function of the Rashtriya Swayamsevak Sangh (RSS), foregrounds the stunted nature of politics in India.

Politics is about reaching out

First, consider the absurdity of the prevailing schoolboy notion of “team” spirit extending to a ban on supping with one’s political opponents or with those whose ideology is distant from one’s own. This downgrades politicians to being nothing more than groupies of one or the other party – much like football fans.  Amusingly, ever more rigorous behavioural tests of allegiance are demanded, as parties themselves, become ideologically indistinguishable.

After all, other than the fuzzy social concept of Hindutva, there is little to distinguish between the BJP and the Congress. Even Hindutva – at least the soft Vajpayee version – is associated with no discrimination across caste or religion. This naturally includes no mollycoddling of Muslims or Christian but also rules out targeted pogroms against them. The constitution makes Sikhs, Buddhists and Jains, honorary Hindus, even though, these are distinct religious minorities. The erstwhile Karnataka government proposed this year that Lingayats be listed as a minority religion within the Hindu pantheon.

None of this aligns with the hard Hindutva line of “nationalising” Hinduism to the exclusion of all other religions. Indian Muslims often retain their caste consciousness, as do Sikhs, even though neither religion envisages caste divisions. For Baba sahib Ambedkar, caste and not religion, was the biggest social cleavage. And he was right.

Who, amongst the opposition, is not a Hindu? 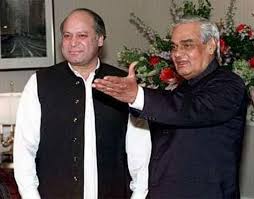 Second, it is odd that, on the one hand, the “secular” camp bemoans the absence of “tall” leaders, like Atal ji, who were widely acceptable, aroused respect rather than antagonism and who could be relied upon to do the right thing by the nation. Yet, they take strong exception to Pranab da emulating the Vajpayee brand of inclusiveness, by reaching out to the RSS. Pranab da did not go to Nagpur in the naïve hope of converting the RSS into a peacenik. The purpose was to show to the current lot of political leaders, that it is possible to stand firm, on what one believes, even in the midst of political opponents. After all, our diplomats do this almost daily, when they serve on committees and in nations, where the mood may be inimical to India. By participating, one shows the public, the strength of one’s conviction and the rationale thereof. Opponents may remain opponents. But at the fringe, citizens get the opportunity to rethink role models, possibly resulting in a softening of hard positions, much like a glacier crumbling at the edges, in the face of climate change.

Demonising one’s opponent is unhelpful, listening and participating is better

Third, demonization of opponents is reminiscent of what fundamentalists do. Those who espouse a secular, liberal agenda must surely shun the fundamentalist’s tool kit. Prime Minister Modi was widely criticised by the secular crowd, for not donning a skull-cap, publicly offered to him by a delegation of Muslims in Gujarat. This was an extreme case of political symbolism, marking out Mr Modi, as being different from the average leader, who has no qualms paying lip-service to minority sentiment. The hosting of Iftaar parties, by those, not keeping the fast, is a prime example of superficial secularism. 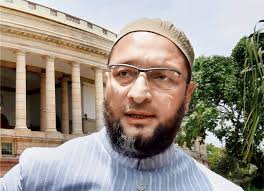 Asaduddin Owaisi, an MP from Hyderabad and President of the All India Majlis-e-Ittehadul Muslimeen, claims Pranab da’s Nagpur visit has “finished” the Congress. The implication is that Muslims will no longer feel “protected” by the Congress. This is entirely possible. But it could signal progress of sorts. Minorities voting for parties which advance their modern professional or business identities, rather than feeding-off their traditional identities, would be encouraging. If the Hindu vote is splintered today, why must minority votes remain transferable en-bloc, like pocket boroughs?

We need more leaders like Pranab da, who are unafraid to grow a common ground between the uber Right RSS and mainstream, secular Indians. Even the Bharatiya Janata Party (BJP) should rethink its arcane electoral arithmetic, based on uniting the Hindus against the rest. The “Hindus” have never been a monolithic group. Caste and regional identities have always mattered more than the fact of being part of a family of Hindu religions. That is why Hinduism, despite all its warts – like the caste system – remains an attractive, forward looking religion, which assimilates rather than divides. Nationalising Hinduism, as the RSS is trying to do, will be as disastrously limiting, as the nationalisation of the private sector by Indira Gandhi, was for India.

Looking for repeat orders is better than one-off customers

The BJP came as a whiff of fresh air in 2014, after a decade of more-of-the- same rule by the United Progressive Alliance. The last four years have seen some economic progress. The BJP should feel confident of citizen support based on results. It clearly overreached whilst setting targets, quite forgetting, that high aggregate targets do not matter to the average voter. Much as in commerce, repeat orders, are an outcome of a rewarding, initial customer experience. Would you buy a Patanjali product the second time, merely because their turnover is increasing rapidly or because the initial customer experience pleased you? Voters are no different. Indivisible security and shared growth remain key touchstones of State credibility. The government must strive to achieve these.