Every passing day, America plays the truculent, ageing diva on the wane, whilst China exudes a quiet, confident gravitas. Their chosen global roles, however, do not reflect the fundamentals of either country.

America is one of the few developed countries with a robust economy, relative to its overwhelming size. It grew smartly at an average of 2.5 per cent over 1990 to 2016 (versus world growth 2.8 per cent). In Europe and Japan, ageing and poor economic policies are slowing down the revival process, post the 2008 slowdown. But America, thanks to its ‘open-doors’ policy for talent, its zeal for innovation and a super-educational architecture, has rebounded –– even though President Trump continues to play to the injured sentiments of middle America, which sees growth and jobs as a zero sum game.  But psychologically, America is shrinking into a smaller island of prosperity than it needs to be. The mood of the nation is to cut its losses overseas, lock the doors and count its millions. This is akin to voluntary national euthanasia.

China, despite much less going for it physically, is psychologically expansive in its ambitions – eager to fill the gaps opened up by a receding America. In 2016, GDP at US$ 9.5 trillion (constant $ 2010) was roughly where America was in 1990. Despite high levels of inequality, which concentrates the incremental growth and wealth at the top, President Xi enjoys enviable domestic support. The average Chinese is gung-ho about occupying centre stage in global affairs.  Strategic allocation of its surplus for investments overseas has created an alternative variety of quasi sovereign international finance which, to put it bluntly, seeks to “immizerise”- to twist Professor Bhagwati’s signature concept-  the beneficiary nations who accept its cheap loans.

Inability to repay the loans followed by benevolent ever-greening of the loans, will bind the beneficiary nations into a long-term, largely one-sided financial relationship, reducing once independent nations to vassals. The Chinese will try and stretch out this symbiotic arrangement till they either supersede or take control of the United Nations and related institutional arrangements for management of international affairs. China might become the largest economy by 2030, and by 2040 indentured nations will have little choice except to bow to Chinese dominance, much like an addict wanting her next shot at any cost. It is unclear, however, if China will have the staying power to continue to splurge cash on winning friends till then. 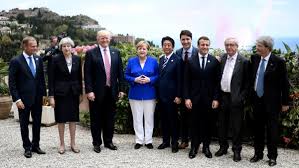 This set of “friends of America” (FOA) still account for around 58 per cent of world GDP. But America’s share has shrivelled to around 18 per cent of world GDP. This is the core of President Trump’s angst. Whilst the FOA group has grown significantly since 1960, under American protection, they continue to be free riders when it comes to spending big bucks on global security. Indeed, avoiding large outlays on defence expenditure has enabled these economies to divert resources for growth and social welfare.

The truant behaviour by POTUS at the Quebec G7 meet should be viewed in this context. One can even make the argument that the trade wars are not so much directed at China but at America’s own allies – a wakeup call to start paying the bills for global domination. America is set to become an international wallflower after a half century of global domination.

China grew spectacularly at just under 10 per cent per year over 1990-2016. But to achieve somewhere close to the critical mass – 30 per cent of world GDP- needed for global domination, it will need to grow for twenty more years at 4 per cent above the rate of world growth. But unlike America, it does not yet have a set of permanent allies, who could pump up the group share.

India is a likely candidate for such friendship. Russia and India share traditional bonds which have deepened through the purchase, by India, of defence equipment. A bloc comprising China, India, Russia and Iran (CIRI) can pump up China’s economic heft to around 45 per cent of world GDP by 2040. China and India, respectively, would account for around 30 and 10 per cent of world GDP.

Admittedly, CIRI would be a grouping of convenience. The Friends of America group, in comparison, are glued together by history, culture, religion & race (other than Japan) and the liberal democratic State architecture.

It is unclear which way India should turn. India will be an easy fit into the FOA group because of shared liberal democratic values; history and language. India could bring to that group the demographic energy, at a scale they lack. But it is in the CIRI group, that India could play the more substantive role, including by providing much needed soft power to pull-in other nascent liberal democracies. In neither group is India likely to be the decisive partner over the next 20 years, which hurts our ego.

A third pragmatic option is to play Switzerland on an international scale. Remain a neutral, trusted adviser to both groups – neither antagonistic nor subservient to either whilst remaining focused on shared economic growth domestically. International credibility to chart this principled course would depend upon developing a domestic eco-system reflecting these principles. This course suits Indian aspirations for leadership best. But are we, ourselves, ready to live by an elevated moral and human code?