Posted on September 13, 2018 by Sanjeev Ahluwalia 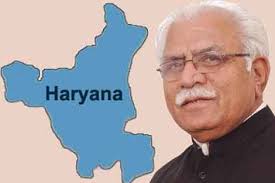 Today we found the grandfatherly chief minister of Haryana Mohan Lal Khattar smiling at us out of a half-page advertisement, paid for by taxpayers, announcing an “unprecedented decision” of his government. From October 1, 2018 onwards, electricity customers consuming less than 500 kilowatt hours per month would pay between 16 to 47 per cent less to their distribution utility. The advertisement proclaims that 4 million consumers in Haryana would benefit.

So who is going to pay for this pre-election bonanza and why is it necessary? In 2017-18 the Haryana Electricity Regulatory Commission (HERC) estimated that the all-in cost of supply to a low tension (LT) consumer – low tension here refers to the voltage of supply and not the potential for aggravation – was Rs 7.25 per kWh. Compare this with the paltry existing tariff which ranges from Rs 2.70 to 5.56 per kWh, increasing progressively up to a monthly consumption of 500 kWh. At no point of consumption, till 500 KWh per month, does the utility recover its cost of supply.

Fiscal red flags may be raised

With the latest bonanza, this loss would further increase. To be sure the HERC can recover some of this loss by charging even more than the cost of supply to other consumers who use more electricity at LT or increasing the tariff for Industry which uses High Tension supply. That has been the strategy all along. But there are problems with continuing the “robbing Peter to pay Paul Robin Hood” approach to finance a utility.

So why have an Electricity Act at all if it is to be flagrantly flouted?

First, the Electricity Act 2003 enjoins regulators and utilities to decrease (not increase) cross-subsidies (meeting the loss from one by over-charging another). This is not just an issue of commercial equity that customers should be charged what it costs to serve them.

Far more important, excessive cross-subsidy can and does severely distort prices and business decisions. Those charged below market rates are prone to wasteful use. Those charged more are prone to steal, game the system (by getting multiple meters) and in the case of industry, become uncompetitive versus other producers in states with more rational tariff policies.

That Haryana’s prices are severely distorted is clear from the fact that the new reduced tariffs (Rs 2 to 4.27 per kWh up to 400 kWh and Rs 4.56 per kWh up to 500 kWh) will not even meet the utility’s cost of power purchase which was Rs 4.13 per kWh last year. Increasing rather than reducing the cross-subsidy and taking it beyond the statutory maximum limit of 20 per cent is ultra vires the objectives of Section 61 of the Electricity Act 2003.

Where are the poor in Haryana and how many are they? 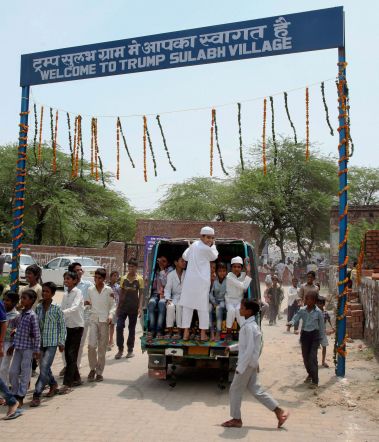 Waiting for goodies – A village in Haryana’s backward district Mewat renames itself as “Trump Village”.

Second, does the average Haryana electricity consumer need the deep subsidy? The answer is a resounding no. First, the level of poverty in Haryana was one of the lowest in the country at around 11 per cent in 2011 (census data) when the national average was 22 per cent. Since then it has been a high growth economy clocking 11.5 percent per annum in current prices. Poverty in Haryana is low, possibly less than the 3 per cent red flag. Second, the average per capita income is the fifth highest (2014-15) with only Delhi which is part of the contiguous National Capital region and Chandigarh which is Haryana and Punjab’s combined capital ahead of it, along with Goa and Sikkim. Third, it is a 100 per cent electrified state which had 4.1 million electricity customers in 2007. The existing retail tariff subsidizes consumption up to 500 kWh by between 63 to 23 per cent. The new tariffs would increase the subsidy to between 72 to 35 per cent.

Why was the state government in a hurry to announce these new tariffs without any supporting announcement from the regulator? Possibly, this illustrates the current impatience with due process and cynicism around independent regulation. But more likely, this is just one in a series of pre-election bonanzas.

Can Haryana afford to waste money on poorly targeted freebies? The answer is a qualified yes. Haryana’s fiscal stability, as measured by the “revenue deficit (RD)” – the excess of current spending over revenue, is better than its immediate neighbours- Rajasthan and Punjab. Haryana’s RD was high at 2.4 per cent of gross state domestic product (GSDP) in 2015-16. But it is expected to reduce from 1.4 per cent in 2017-18 to 1.2 per cent in 2018-19. The latest subsidy bonanza may, however, upset plans to meet that target. 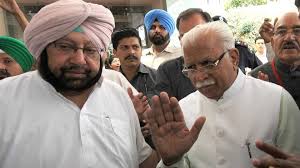 Three other non-contiguous states are worse than Haryana in 2017-18 – Assam, Kerala and Himachal Pradesh. But that still leaves 24 other states doing better than Haryana. That statistic alone should make Haryana’s combative leadership and progressive citizenry stop and re-think their fiscal allocations.

Even if Haryana has money to spare, subsidising electricity customers is a poorly targeted priority for its resources. It also does not speak well of party discipline and ideology since the Union government ruled by the BJP, as in Haryana, has diligently followed the fiscal stability agenda.

Fiscal exuberance in “rich” states just prior to elections needs to be penalised. One hopes the Fifteenth Finance Commission evolves a formula for penalising freebies (political gifts). The judiciary can also bell the cat as it is doing in an environment and human rights. Adding the fiscal review to the overburden of the higher judiciary is a bad option. But we may be heading there if public funds are spent with impunity for partisan benefits.s