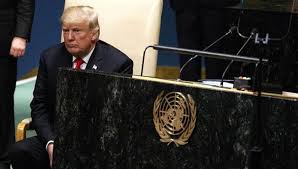 President Trump does himself no favours by going out of his way to be deviant, as he did whilst addressing the UN General Assembly yesterday. Odd that a billionaire, realty tycoon should need to resort to coarse behaviour to stroke up self-confidence. Put it down to the testosterone filled hubris of corporate American, male machismo and forget about it.

Read the intent not the optics

The truth is that behind the pugnacious façade is an “honest” politician who wants to run an administration in terms which are understandable to the average American – not just the cerebral coastal types. At the cutting edge America is exactly like President Trump – bullying deal makers who neither expect nor give any quarter except for a very good reason.

You may prefer the moralistic flailing of President Obama or the glib speak of Hillary Clinton. The former uplifts. The latter grits your teeth for the plastic political correctness of it all. Trump may merely amuse you. But don’t underestimate him. He is using America’s power in the way it should have been done, long ago, to push back on the one sided economic deals it has struck with it’s allies – political support in exchange for global security. The roue is in decline and is raking back all the cash it can muster.

So, what did President Trump tell India? If you were listening and not rolling in the aisles with laughter at POTUS’s buffoonish ways, three messages stand out if you read between the lines in the sections on democracy, socialism, immigration, sovereignty and global security.

First, in a Trump world, India is a massive, progressive, democratic but POOR country, which is doing a good job reducing poverty. This is important. We are not the rising super star we imagine ourselves to be. We are not competition for China. We are not even the pole in Asia – that continues to belong to Japan, Australia and the Asean countries.

Yes, that sounds terrible. But it knocks some sense into our heads. Our first and only task is to reallocate resources towards investing in removing multi-dimensional poverty which traps around 47 per cent of our population (2016 UNDP). Of these 9 per cent of Indians are trapped in extreme poverty;  an additional 19 per cent are slightly better but still poor. Most worringly 19 per cent live on the edge and can become poor via the next economic or ecological shock – drought, floods, public health disasters or just indifferent economic management.

Focusing more on greening public investment in infrastructure, education, health and sanitation is the development narrative we need to spin, of working hard to get the world rid of poverty – sustainably, quietly and innovatively in uniquely Indian ways. Just consistent, plain, good, hard work on the plumbing by experts who have done this before. This is the first message.

The second message is that America values its sovereignty and independence and is willing to secure likewise for its friends. They will not preach what you should be doing in your country or how you should be praying. That is your business. But if you violate American sovereignty through drugs, immigration or terror. America shall come after you.

This is very close to the India position except we just don’t have the reach to go after our enemies in quite the same manner as America. Can we get this power in the short run? No. Is there a sequence of investment to be followed? Yes. A sequence that first puts in world class infrastructure and human capital achievements before running for guns.

In the meantime, use savvy political and diplomatic accommodation to go under the radar and if the chips are down use the N deterrent card should any country seek to abuse our sovereignty. Learn from the British, the guile and charm with which they shake hands, seemingly as friends, whilst actually transferring your full pockets into their own empty ones. That is the kind of diplomacy we need, not the gun trotting, bravura kind. And please forget about pushing for more US visas. The cheap body count model of IT servicing is dead.

The third message is that if we want to play “big boy war games” – like Germany, France, the UK, Canada tend to, we will need to do so on your own balance sheet. Don’t expect American cash to implicitly bankroll your flag waving around the globe.

India should listen carefully. Prime Minister Modi has been misled by this government’s security and diplomatic advisers into believing that selling a cardboard image of a “Strong India” to foreigners, can diffuse onto the Indian voter back home, lifting the mood. This is “Shining India” redux. And what does one gain by doing this?

We pile up debt for buying trinkets like the Rafale jets, better guns, bigger ships and bullet trains. All this at the expense of making our domestic economy truly competitive. Domestic investment has been low, not least in agriculture. We should rectify this. It is an outcome of correcting the excess financing of the post 2008 go-go years of the UPA, much of which is sitting with banks as bad loans.

The fact is we need large significant budgetary and development assistance credit if we are to increase spending whilst retaining fiscal stability. This means eating humble pie and going cap in hand to the International Financial Institutions. We should have done this well before going for the big bang GST reform to provide a fiscal buffer. It is still not too late to start the discussions.

Is the government getting captive to pre-election rhetoric 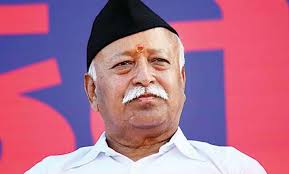 Unfortunately the pre-election noise is vitiating decision making. Even the Rashtriya Swayamsevak Sangh (RSS) has departed from its monkish discipline and austere style and fallen for the trappings of public office. Aping the BJP in organising lavish, mega events is likely to be detrimental to both organisations. The contagion of public office spreads faster than an ink stain. Once this seeps into the RSS, they become merely the B team of the BJP. Its strength has been the ascetic’s ability to speak truth (their version) to power. Is politicisation of the RSS the legacy Sarsangchalak Mohan Bhagwat would like to leave?

From the mouths of babes flows wisdom. In India’s case this applies to President Trump’s address yesterday. The problem is are we listening to POTUS or just hearing in his words what we want to hear.