Posted on October 2, 2018 by Sanjeev Ahluwalia 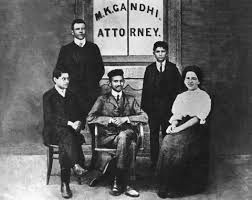 Over 125 years ago, in May 1893, a diminutive, young lawyer boarded a first-class train compartment at Durban on his way to his new workplace in Pretoria, South Africa. At Pietermaritzburg, South Africa, in the middle of the chilly night, over 500 km short of his destination, he was evicted. He had a valid ticket. But he was an Indian and brown as a berry. He was ejected when an on-boarding white passenger complained about sharing the compartment with a coloured person.

An Indian out of sorts with apartheid

Oddly, he took this incident badly. Being an Indian – he was then just over 23 — he should have been accustomed to the pervasive, invisible barriers of caste, race and class back home, which dictated what you ate, with whom and even how you behaved, or the clothes you wore.

Perhaps young Mohandas Karamchand Gandhi had wrongly assumed the extent of egalitarian “protection” that was afforded by a British passport. Perhaps he, like the rest of his colonised brethren, also suffered from the Stockholm syndrome — where your tormentor seems like your benefactor. Perhaps it was the shock of his fall from grace. In India, Gandhi was an upper caste, educated bania, from a family of well-off court officials in Gujarat. In South Africa, he was just another coloured man in a suit. That must have hurt.

He took the incident personally and resolved to fight injustice, racism and inequality. Using the law to fight repression and inequity proved tortuous and time-consuming. Incremental change was not his style. On his return home in 1915, now suitably attired in turban and dhoti, he launched the largest public contact programme ever, and incubated his workbook of ethical, non-violent disobedience to fight unjust laws. So how enduring is his legacy?

Gandhism – out of sync with the 21st century

Gandhian values sound decidedly quirky as personal and institutional traits in the modern world. Austerity, simplicity, non-violence, autonomous, self-sufficient village republics all appear like “loser” values and institutions — the default options available to the weak and the poor, not the preferred options of winners.

Globalisation is all about integration and economies of scale, not self-sufficiency. The technological frontier is leading us towards unprecedented levels of centralisation of information and economic power. Trust as a value, in a globalised world, becomes peripheral to agreements and contracts which are justiciable. We are tweaking nature for enhancing well-being, reversing ageing, preventing disease and death and increasing productivity. Cities are increasingly bigger, higher and more densely populated — the engines of change providing the needed scale and network effects.

Violence is a collateral consequence of rapid change, fragile social contracts and the anonymity of ordinary lives. Between nations and civilisations, peace is defined as the absence of war — tenuously kept at bay by carefully balanced armies or nuclear deterrents assuring mutual annihilation.

Politics and ethics have never mixed well. Often high morality and religion are the cause, not the salve for war and violence. Nathuram Godse was no ordinary assassin. To this misguided man, the physical annihilation of the Mahatma was akin to preserving the future of India, which had already suffered the body-blow of Partition in 1947. Maoist, restive tribal communities and Kashmiri militants are all merely the latest in a long line of communities who similarly respond violently to a perceived violation by the State of their core beliefs or autonomy.

What place could there be in this organised mayhem of modern existence for the simplistic beliefs of Mahatma Gandhi? Could a “Gandhi” be born today? Would he/she resonate with an India which is no longer fragmented, famine-ridden or colonised?

Gandhi inspired Nelson Mandela and Martin Luther King Jr. But both were leaders of marginalised communities, fighting repression at the national level. In India, the popular revulsion against grand corruption, waste and indecisiveness, under the second United Progressive Alliance government of 2009-2014, resulted in the birth of a fledgling party – the Aam Aadmi Party (AAP), led by Arvind Kejriwal. It pledged to restore probity in public affairs, committed to living close to the people they served and to remain accountable via decentralised, participative  decision-making mechanisms. Its leaders shunned the trademark cotton khadi vestments of the independence movement — the hallmark of Indian politicians posturing to be one with the people.

Mr Kejriwal, on becoming chief minister of Delhi courtesy a landslide victory in 2015, attended the President’s formal “At Home” reception on Republic Day in rubber sandals, a pullover and his trade-mark muffler. They outdid the Communists (remember rumpled trade unionist George Fernandes?) at their own game. The AAP even found a mascot — a Gandhi clone in Anna Hazare — a provincial, social activist, prone to using the Gandhian tactic of “fast-unto-death” to persuade governments into ethical action — in this case to constitute an ombudsman. Seven years later, India still doesn’t have an ombudsman. The AAP and Anna Hazare have since fallen out because of asymmetric political objectives, and political Gandhism lies in tatters. 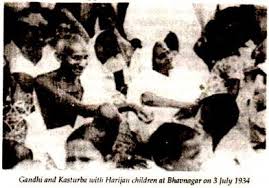 The Gandhian principle most successfully used in India requires that no State decision is taken that does not benefit the poorest person. Despite rising inequality, especially since 1992, high growth rates have diluted the extent of poverty. The headcount of those with incomes up to $1.9 per day (in 2011 constant terms) declined from 55 per cent in 1983 to 46 per cent by 1993, and then fell rapidly to 21 per cent by 2011. By 2020, it is expected to decline to nine per cent.

Firing on multiple fronts, the Narendra Modi government is working to rapidly reduce the extent of multi-dimensional poverty with improved public service delivery by 2030. The good news is that these services are increasingly universally available to all communities, based on economic criteria.

Bapu would have liked that. He liked diverse but harmonious, well-knit, disciplined communities, quite similar to China’s model of “people’s democracy”. Gandhiji, Jawaharlal Nehru and Indira Gandhi were paternalistic democrats, as is Prime Minister Modi. This leadership style will endure. It resonates well with our ethos of “democracy with Indian characteristics”.

Adapted from the authors opinion piece in the Asian Age, October 2, 2018 http://www.asianage.com/opinion/columnists/021018/serve-poorest-of-the-poor-be-a-gandhian.html