In a recent freebie on social media, McKinsey – an outrageously expensive US consultancy which spurns a fee below Rs 50 million for even the smallest task – shares lessons learnt by them for producing leaders.

First, good health is critical – a no-brainer. Second, company programs to produce leaders mostly fail – this is well known already. Third, there are as many as fifty separate interventions needed to produce leaders and till at least one half of them are completed don’t expect even partial results – this is indeed new wisdom on the complexity of the process. Finally, focus is what brings results – this is trite spin just to fill the pages.

Commonsense tells us leadership is about standing tall

Who can argue against McKinsey’s research? But common sense observations tell us that a key ingredient of political success in the digital world, is to stand out or be different from the crowd. Some leaders like John F Kennedy, Barack Obama or Jawaharlal Nehru had/have the natural killer looks and character which compel you to give them due regard. Others like Khan Abdul Gaffar Khan (Frontier Gandhi) literally stood head and feet above other leaders and didn’t need to do much else. But what do you do if you are of average height and looks?

The average person needs a manufactured public persona to stand out

Developing a public persona helps. Mohandas Karamchand Gandhi did this to perfection. From being perfectly forgettable, he transformed into a visible embodiment of service and devotion to a higher cause. The Spartan clothing, even in London’s freezing winter, the frugal lifestyle, in an age when consumption was not a dirty ecological word, the actions of self-denial which abjured personal political gratification – all conspired to give him the status of a Mahatma.

Indira Gandhi also did this perfectly. She combined the coiffured look – there are no photographs of her in a rumpled sari or with her hair in a mess – with her superb ability for understated glamour. Remember the Rudraksha mala she flaunted – fashionable in its simplicity but also signalling sanyas from worldly addictions. 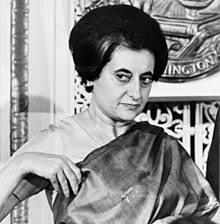 Others in this game have been VP Singh the “mandal” man who exuded refinement and aristocracy, whilst batting politically for the hitherto neglected middle castes. His Astarkhan cap covered his bald pate elegantly but more significantly, sent a strong message of cultural plurality – a message that proponents of “mandal politics” like Mulayam Singh Yadav’s Samajwadi Party – a breakaway faction of the erstwhile Janata Dal – continue to project in Uttar Pradesh.

Amongst the Indian prime ministers after Indira Gandhi, it is Narendra Modi who stands out for developing a persona exuding power, executive effectiveness and political courage. Much has been made of who owns the bandgala jacket. This style of outer clothing was a favourite of Jawaharlal Nehru. But it was reinvented by Modi after it had fallen into disuse in the post-Nehruvian era.

Actually Modi need not have bothered with the jacket because his most original contribution to political fashion is the bear hug that he delivers to friends and refrains from delivering to others.

So deep-rooted has the hug become as a political signal of friendship that Navjot Singh Sidhu, a popular ex-cricketer; a renegade BJP man, recently inducted into the Congress, as a minister in Punjab, was instantly criticised by the BJP, for hugging the Pakistan army chief, General Bajwa in Pakistan, even as Pakistan’s proxy warriors were unleashing terror in India. Sidhu had used the hug, as does Modi, to signal friendship – but possibly chose the wrong occasion, if not the wrong man, in his exuberance.

The Pakistani army is the primary barrier in the normalisation of relations with India. They have the most to lose from peace in the sub-continent. Unlike the Indian army, the Pakistani army is a massive defence, industrial complex, which is not content to play rummy during peace. War, terror or geopolitical tension in South Asia, means money in the bank for them. They are not known to look a gift horse in the mouth. If not the United States then Saudi Arabia or China would do.

Rahul turns “the Modi hug” into a weapon 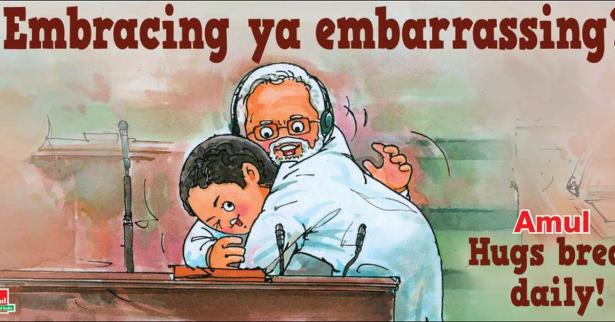 The “Modi hug” was also used by Rahul Gandhi to distinguish himself from Modi- who never hugs foes, possibly having learnt from the Afzal Khan-Shivaji hug (mid 17th century) how treacherous and fatal these can be. Rahul dramatically crossed the well of the House, walked up to the Treasury benches and hugged the hapless Modi – who was flummoxed and remained sitting even as Rahul clung awkwardly to him in a “breaking news” message of magnanimity and peace across parties – unfortunately, spoilt by a naught wink at his colleagues on the opposition side of the House.

The political hug was first used as a calling card by the universally liked Yasser Arafat (1929-2004) the best known Chairman of the Palestine Liberation Organisation, as a visible gesture of Arab goodwill and peace, to distinguish himself from the aggressive and threateningly stiff postures of Israeli politicians – who incidentally have become no better, half a century since. 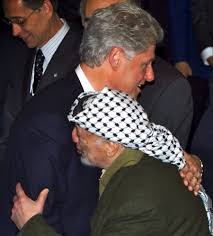 In Islamic culture, a hug between two people of the same gender is a traditional style of greeting. The northern part of India, which was ruled by Islamic invaders for close to six centuries till the British replaced them, has embedded this style of greeting across religions. However, in recent times religious polarisation has driven Hindus to increasingly prefer the folding of their hands – the Namaste – as a “touch me not” style of greeting also popular in parts of South East Asia. This form of greeting incidentally, also serves well the traditional Hindu concept of purity/pollution. Upper castes can be ritually polluted by coming into contact with the lowest of untouchables – a practise and culture explored by Indo-American author Sujatha Gidla – “An ant amongst elephants: An Untouchable Family and the Making of Modern India”. 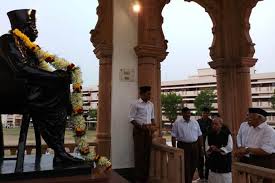 McKinsey may know best how to make leaders in companies. But in politics, it could learn a lesson or two from Modi – who thrived in the nurturing milieu of the Rashtriya Svayamsevak Sangh (RSS) the mother organisation, of which the Bharatiya Janata Party (BJP) is a political subsidiary. Maybe it is time New York City learns from Nagpur.

One thought on “McKinsey can learn from Modi”