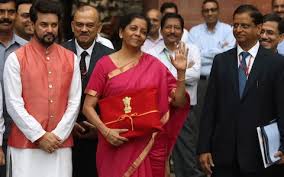 Budget FY 2020, tabled on July 5 in Parliament, unintentionally unleashed a “whodunnit” type mystery with serious downstream negative fiscal impacts. The snafu was spotted by eagle-eyed economists Ratin Roy, director of the National Institute of Public Finance and Policy, and Nitin Desai, a previous Chief Economic Advisor, within hours of the tabling of the Budget. In response, there has only been deafening silence from the government.

The Budget over-estimated the 2018-19 revenue receipts by 9.6 per cent. Till January 2019, the Controller General of Accounts had reported revenue receipts of Rs 11.8 trillion. A simple extrapolation of the trend over the next two months (February and March 2019) throws up Rs 14.2 trillion for the full fiscal year.

The revised estimate in the Interim Budget, presented on February 1, was Rs 17.25 trillion —assuming thereby a massive infusion of Rs 5.4 trillion of revenue in the last two months amounting to Rs 2.7 trillion a month – a startlingly large sum of money. Oddly, by July 5, this estimate had increased, albeit only marginally, to Rs 17.29 trillion.

The cat was let out of the bag by the Economic Survey authored by the new Chief Economic Advisor (CEA), Krishnamurthy Subramanian, and tabled by the finance minister on July 4 in Parliament. It provided a far more believable provisional actual revenue receipt of Rs 15.63 trillion for 2018-19 based on data provided by the Controller General of Accounts (CGA) released after the Interim Budget in May 2019.

The Budget is tabled one day after the Economic Survey. The CEA is administratively under the Secretary, Department of Economic Affairs, who is also currently the Finance
Secretary.

How did this massive discrepancy (amounting to 0.9 per cent of the GDP) occur and why? Will the government amend the Budget documents — already in Parliament — to reflect the true revenue receipt (RR) for 2018-19?

The data on provisional actuals — the lower RR number — is unlike GDP data. There are no assumptions to hide behind. In any case, the CGA receipts data coming in lower than the Budget estimate can only imply two things.

Either the CGA has forgotten to include the Rs 1.7 trillion lying about in the treasury. This is unlikely. The CGA is a professional cadre where staff and officers are permanently employed in accounting for the government’s receipts and expenditures. They do not mess up except very, very marginally.

The economic division, which prepares the Economic Survey and which used the CGA data correctly, is similarly staffed by professional economists with long experience in fiscal and development economics.

The Budget Division, however, is staffed by a mix of officers on deputation from other cadres. The additional secretary, budget’s boss is the secretary, department of economic affairs, who is, usually, another generalist.

More likely, lack of application of mind or just plain carelessness, possibly poor coordination between the CGA and the Budget division, was to blame. Alternatively, officers and their political superiors actually knew about the CGA’s lower RR data but deliberately misinformed Parliament. This is too shocking to even consider.

What then could be the motive for the data fudge? Possibly, the desire to boost revenue performance versus the high targets in the Interim Budget and keep the fiscal deficit at prudent levels coupled with a compulsion to “carry the ball” – a misguided form of teamwork – in the July Budget for 2019-20. Managerial incentives to fool owners (in this case, citizens as represented by MPs) with creative accounting are not unknown, in the corporate world. It is unlikely, however, that the bureaucracy would willingly risk such misadventures.

The final accounts are based on CGA data. So the fudge could only have worked for a short while. Could it be that a compact struck with the CEA not to use the provisional actuals data in the Economic Survey, to keep it aligned with the Budget documents, and he backtracked? Or was he never consulted on the fudge and refused to play ball once he came to know?

Why does it matter? Credit rating agencies and analysts focus on the metric of fiscal deficit (FD) — the difference between revenue and expenditure of all types expressed as a proportion of GDP. Our Fiscal Responsibility and Budget Management Act, was termed as an inviolable book-end of the fiscal envelop available to her, by Finance Minister Sitharaman, the other book end being the baggage of the past inherited by her.

If revenue receipts in 2018-19 were short by Rs 1.7 trillion, this year’s revenue growth would have to be an unreal 25.6 per cent to achieve the target instead of 13.5 per cent as budgeted — even this being a tough target in a downturn. The revenue estimates tabled in Parliament are hopelessly incorrect and unrealistic, even taking into account the additional excise duty and infrastructure development cess of Rs 1 each levied per litre of petrol and diesel; and the higher customs duty on a number of products to “protect” Make in India and the income tax surcharge on the super-rich. Revenue receipts will have to be revised downwards.

The borrowing programme would increase from Rs 8.7 trillion to Rs 10.4 trillion — a hike of Rs 1.2 trillion — 13 per cent more than the original estimate and higher than the borrowing in 2018-19.

Optionally, the government can cut back expenditure. This would demonstrate a resolve to adhere to a hard budget constraint. It would be viewed favourably by foreign analysts and credit rating agencies, which must be quite shocked at such massive budgeting errors in a potential sovereign borrower, with an investment grade rating, headed for the international bond markets soon. 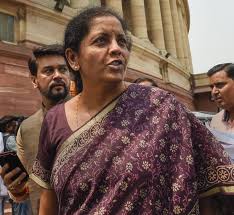 The Finance Minister in her usual sincere and forthright manner provided an explanation for this snafu whilst replying to the budget debate on July 10. Apparently the Budget used the same revenue assumptions as were in the Interim Budget for better comparability between the two. The Economic Survey chose to use the updated CGA’s data. Inconsistency between the two does not worry the Finance Ministry because they maintain an “arms length relationship with the CEA”. This is new. It begs the question as to what then is the role of the CEA and should the division not be incorporated into the NITI Ayog, if all it is to do is “blue skies thinking” unconstrained by the context or practicality?

An unrealistic budget is like wielding a blunt knife

The real question is why was the new CGA data not incorporated into the budget assumptions to make them more realistic? The larger question worrying budget purists is what is the sense in Parliament approving a budget which overestimates revenue receipts by nearly 1 per cent of GDP? Does this not imply arbitrary cut backs by the executive in approved expenditure?

Heads will roll in due course. Far more importantly, this indicates the lack of an institutionalised team for checks and balances and teamwork. One can only wonder at the confusion that the proposed, disruptive lateral entry of 400 senior officers, recruited from the market, would cause, fed by internecine wars between cadres, unless we have systems in place to replace the glue of cadre and personal loyalties.

Adapted from the authors opinion piece in The Asian Age, July 10, 2019 https://www.asianage.com/opinion/columnists/100719/budget-data-snafu-no-answers-in-sight.html