Posted on October 15, 2019 by Sanjeev Ahluwalia 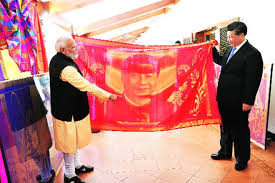 Two burly, senior citizens – Prime Minister Modi and President Xi doing a tango on the beach at Mamallapuram doesn’t quite evoke the carefully synchronised but fiercely intense passion of this Argentinian dance form. Even the cool looking, athletic Barrack Obama was left with two left feet when he was led onto the floor for a Tango, during his visit to Argentina in 2017 as POTUS.

Tango is best left to the Argentinians. A fusion of Bharat Natyam – language in motion- and Kung Fu – concealed strength and stability – speak better to the messages at Mahallapuram.

To the uninitiated observer – i.e. anyone who is external to our ministry of external affairs – the reasons for our uneasy relationship with China seem obscure.

China is five times our size in economic terms and at least three times our geographical size. It has never been colonised. Our tryst with freedom from external rule began just 70 odd years ago. China is a permanent member of the Security Council, we are not. Need one say more?

In the normal course of things, India should be sending silver and gold flowers – like Malaysia – to China, as an annual tribute to demonstrate that we do not contest their predominance in Asia. No country in the world today, including the United States, considers it wise to confront or push China over the edge or out of the prominent geo-political space it occupies. Can we afford to be different?

For us China is a role model of fast growth. There could be other lessons to be learnt from China despite our vastly different historical and civilizational context. Nor should our foreign policy be driven by a visceral urge to isolate or discredit Pakistan. Doing so simply elevates Pakistan to become a convenient target for being befriended by any third country which wishes to build an alliance against India. The US and now China have both played this role.

Pakistan – The eternal spoke in the wheel

It is important to counter Pakistan’s vicious terror related activities and its near continuous propaganda against India. At the same time we must ceaselessly work towards supporting democratic regimes in Pakistan. But India’s size and economic heft do come with some advantages. Offering to be friends and being seriously considered by China, is one of them.

The World – except us – celebrates China

Sunil Mittal, chairman of Bharati Airtel is prescient when he recently openly complimented Huawei – China’s largest telecom equipment manufacturer which is on a US blacklist- on its technological prowess in 5G equipment. He also pointed to the opportunity presented to India to integrate the Huawei 5G technology, which China may open up to India, to counter US sanctions against the firm. Getting ahead in 5G means getting a head start into the Internet of Things – the growth enhancing eco-system of the near future.

We share little, except a border and a history of animosity

China and India share a border but very little trust. The lack of trust is the consequence of the “great betrayal” from India’s point of view, when Chinese troops invaded India in 1962 and inflicted a crushing defeat before declaring a unilateral cease-fire. Both India and China have changed much since then. We must reconfigure our relationship along the lines of mutual benefit.

Getting access to China’s massive import market of $1.8 trillion (2017) is dependent on India showing “friendship” in conciliatory, non-threatening ways. Doing so is a pre-condition for being “granted” positive trade flows into China (imports exceed Chinese exports to the partner country). Japan, Korea, Malaysia and Thailand all fall in this fortunate category. India, which does not dance well to the conciliatory tune, is punished. Chinese imports from India are kept at 25 per cent of Chinese exports to India. This ratio can only change by détente.

China imports US$ 71 billion worth of vegetables and US$ 23 billion of food stuff. India’s export of vegetables to China is just US $ 0.5 billion and exports of food products are negligible. There appear to be huge trade complementarity here if the political will exists on both sides. India’s exports shave stagnated for the last four years. We urgently need to double agricultural productivity and diversify the cropping pattern away from cereals. Opting for “managed” trade arrangements with China is an attractive option, even if the enhanced trade flows are denominated in Chinese Yuan.

Clearly, India is not likely to dilute its long standing minimum strategic backstops on boundary issues. Nor should it stop investing in the border areas or modernising our military capabilities. These are the essentials of sovereignty in a tough neighbourhood.

But lightening the mood beyond sipping coconut water to actually exporting it to China, is a bargain worth considering. If our top negotiators have to learn to grovel, they should do so for concrete economic advantages, like ramping up our exports to China from US$ 16 billion (2017) to US $ 100.

Prime Minister Modi has the genius of being remarkably adaptable to the prevailing context. Some of this should rub-off on our South Block mandarins.