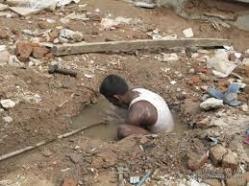 Come May 16, Team Modi will be “riding” into Delhi in a triumphant explosion of fireworks, marigold and rose garlands and ladoos (sweets). After the celebrations are done; the flags and caps given away to raddi and the posters hang limp and ragged, Modi will get down to implementing his manifesto and try to outdo Kejriwal’s frenetic 49 day blitzkrieg.

Elections are to a democracy, what war is to a Nation. Our elections tend to highlight the innumerable cleavages in society, some of them exceedingly bitter, which get papered over. But once in every five years we get to “ground truth” how far we have come in integrating ourselves.  The answer for 2014 is not very far. The bitterest divide and mutual suspicion is between Hindus and Muslims followed by between Dalits and the rest. Modi will need to act expeditiously on both.

What matters most to both social segments (Muslims and Dalits, both of whom are “outsiders” to the Hindu mainstream) is security of life and property and jobs.

Security is a matter squarely in the mandate of state governments. But there are some things the center can do.

First, appoint a BJP Home Minister who has a track record of plurality and a persona which encourages reconciliation and compromise, rather than confrontation. Arun Jaitley fits the bill. Second, ramp up the activities of the Intelligence Bureau. The IB operates nationally and can gather and report intelligence for prevention of organized crime and sectarian violence. Third, use the constitutional provisions to act against a state government, which ignores early warnings from IB and fails to protect its citizens against organized crime and sectarian violence. Fourth, fast forward the UID (Aadhar card). It is the best available mechanism for seamless digitization of an individual’s identity across the country; the prevention of duplication and verifying identity irrespective of the current location of the holder.

A caveat here. As in business, there is no substitute for credibility and no better measure of good intentions than ones actions. Amit Shah, a close confidant of Modi, must not find a place in the cabinet. Shah was invaluable for his organizational skill to topple the old paper tigers of the BJP in UP; Lalji Tandon (Lucknow) and Murli Manohar Joshi (Varanasi) and keep a close watch over the faction ridden activities of the party in UP. His job is done and he must recede into the shadows of Gujarat.

After security comes the more uphill task of providing productive jobs. Jobs are the outcome of investment and inclusive growth, both of which the BJP manifesto focuses. An important keystone of growth, which has received less than deserved attention, is making government more effective; re-energizing babus to become performance oriented and reshaping the architecture of the central government. Here is what Modi can do in the first 100 days.

First, reassure the babus in Delhi; Joint Secretary upwards, numbering around 1000, that there is no retribution coming merely because they worked closely; were appointed or promoted under a UPA government. To build trust and camaraderie, the PM must view this set of babus as his personal executive team and be inclusive though his actions. Selection; performance review and most importantly grievance redressal, including regulated but direct access to him for senior babus, must be the PMs prerogative. Nothing works as well as even the briefest face-to-face interaction between a babu and her boss (even through face time at 5.30 am!) to build mutual commitment and confidence.

Second, Modi must act quickly on his promise of treating all the Chief Ministers of state governments as an integral part of his “development” team. The bad mouthing and name calling of the election must get subsumed by a common purpose for mutual gains. The key sticking point here is the manner and the proportion of finances which get distributed as central grants and loans to states. The proportion of central finances shared with the states can increase significantly, in real terms, if the center cuts back on the burgeoning central sector schemes which are devised in and financed by Delhi, but implemented by states. Modi needs to walk the talk here. He must transfer direct decision making power, including design discretion, to the states, subject to mandated and specific inclusion by states of local governments in the implementation of such schemes.

Third, quickly restructure the central government into a more cohesive team with adequate executive support for the leader. Nothing works like evoking symbols to illustrate purpose. Under the previous PM, the Planning Commission grew to become his de facto PMO for matters economic. This will no longer be necessary with a “real” PM in position. The Planning Commission should be merged into a Ministry of Economic Affairs; an internal economic think tank of the government.

The functions of the “real” PMO should be expanded to include a Service Delivery and Development Unit reporting directly to the PM. This unit would be mandated to problem shoot in strategic areas; work with Ministers to find solutions to clogged service delivery channels and straggling central projects; monitoring progress digitally in real time and generate an independent MIS for the eyes of the PM only.

This strategy of choosing specific problems to solve in delivery chains and then going after them hammer and tongs, rather than waiting endlessly for the more tedious all-of-government reform worked well for Tony Blair in the UK (the longest serving Labour PM) and more recently for PM Najib Razak in Malaysia for his re-election. Both interventions enhanced the efficiency and effectiveness of the government and subsequent electoral gains (UK -2005 and Malaysia-2013).

Fourth, reduce the cost whilst enhancing the effectiveness of the central government. Ministries have burgeoned over the last decade to accommodate the “drift dharma” of coalition governments. The central government must be shrunk and ministries collapsed by broad banding related sectors;

(1) Combine the ministries of Heavy Industry; Steel; Chemicals; Industry and Commerce; Micro, Small and Medium Enterprises; Food Processing; Labour and Employment into one Ministry of Industry, Commerce and Employment.

(3) Combine the ministries of Agriculture; Fertilizer; Water Resources; Forests and Wildlife and Earth Sciences into a single Ministry of Earth Resources.

(4) Combine the ministries of Petroleum and Natural Gas; Coal; Power and Renewable Energy into a single Ministry of Energy.

A more significant political advantage of broad banding is that it provides around ten significantly empowered Ministries (including Home, Finance, External Affairs, Human Resources and Health) to accommodate the senior BJP ranks who are currently smarting at their marginalization by the relatively younger Team Modi. Broad banding also allows junior BJP members to be inducted as state ministers for maturing into a line of succession.

The first instinct of a new government is to rush about fulfilling the “promises” made by them in the heat of the electoral battle. This is the glamorous thing to do, which gets instant acclaim both from the media and the citizens. But someone must do the back room drudge of repairing the plumbing; tightening the screws and fixing the nuts and bolts. There is little point in the Captain inviting the world to a deck party, if the waiters are sullen; the canapés indifferent; the boat leaks and the toilets stink. Time to pull the jhadoo out of the closet and use it vigorously.