Posted on January 28, 2016 by Sanjeev Ahluwalia

You have to hand it to the French. They look effortlessly stylish- think Christine Lagarde, the French Managing Director of the IMF. 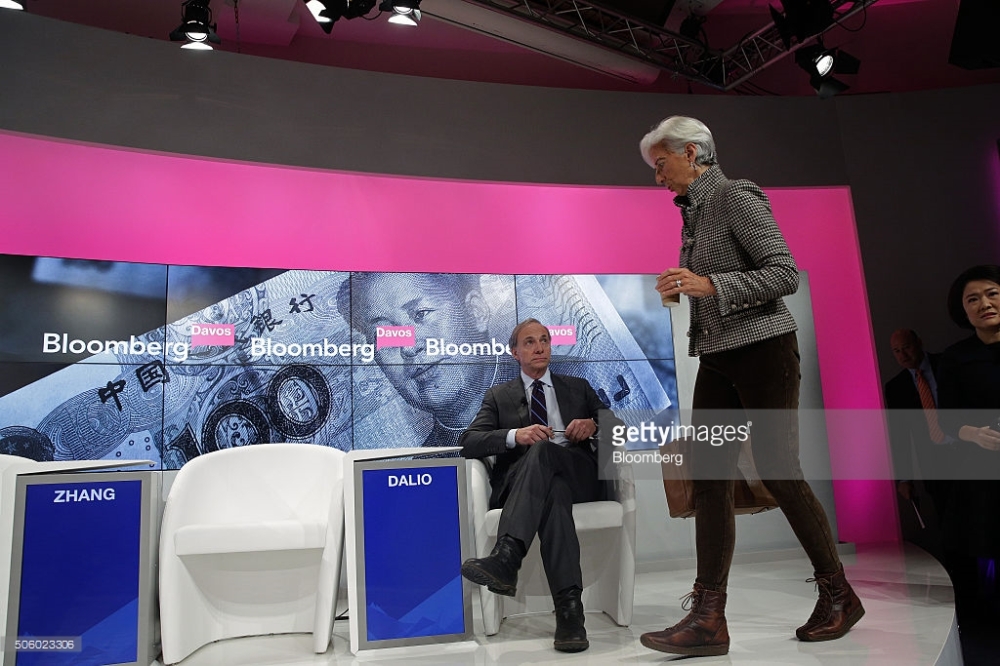 Even when they wear plain work clothes they come encased in an inherited frisson of elegance- the 1789 French revolution, it seems,  diffused aristocratic elegance more evenly rather than destroying it all together, as in Russia. But scratch the coiffed surface and an au natural savage surfaces, readily comfortable with the oddities of humanity existence – cigarette smoke, food smells, passions and emotions. This being the one real French connecion with India.

It is not surprising them that art, fashion and spiritualism constitute areas of instant rapport between Indian and France.

Indian artists- Amrita Sher Gill in the early part of the 20th century; Fashion and art ace photographer Prabudda Dasgupta towards the latter half; 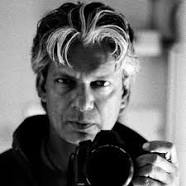 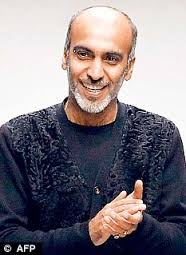 But art and fashion were far from President Hollande’s objectives. So what were the  first impressions from his three day, Indian safari 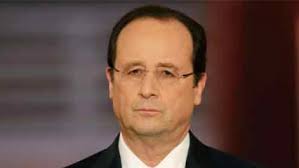 It must have struck him that there is no easy familiarity between the French and Indians. It goes beyond the language barrier. At the heart of the difference is the romantic, liberalism of the French, naively combined with a deep allegiance to preserving their culture. In India, traditional ways are so deep a social barrier for two thirds of Indians that the great hope is for rapid urbanization and industrialization to erode the embedded biases against women, the poor and the marginalized. Disruption rather than continuity is the order of the day in India today.

Too shy to Bhangra?

This difference showed, he must have ruefully thought. There was no spontaneous affection between the visiting French and the Indian people, unlike, he ruefully pondered, what was powerfully on display when Bill Clinton danced the Ghoomer with Haryanvi villagers in 2000. Nor did the French capture hearts and minds, in the manner Michelle Obama did last year, with her ready laugh and radiating warmth. 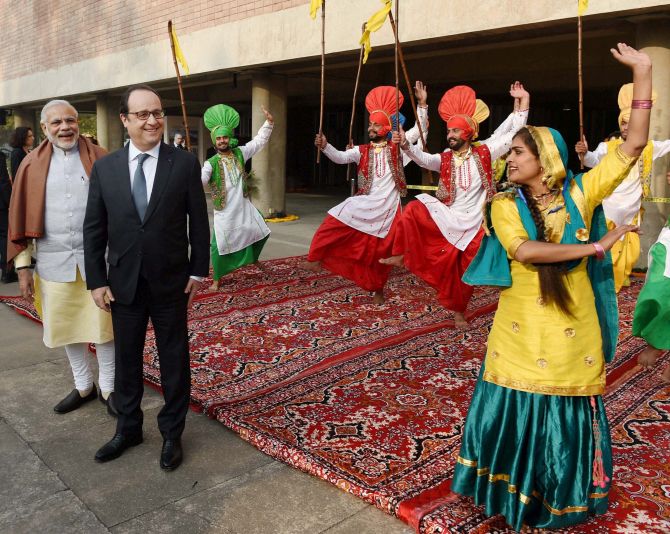 The French are formal people and their Presidents do not go around grabbing babies or unknown dancers. The familiarity never extends beyond a glacial airbrush, double kiss. Elegance, grace and exclusive glamour is the French game and it was played well, in Delhi, as President Hollande supped with the beautiful people. 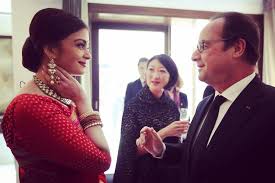 But the President banished such negative thoughts as he slipped off his shoes- hopefully made in France, unlike his spectacles. Sinking into the warm familiarity of his customized Airbus A 300-200, whilst reaching languidly for his favorite seafood aperitif and a well-deserved glass of French wine, he rooted around for “learnings from India” as all diligent leaders must.

The brooding edifice of the Indian state

His overriding emotion was of envy at how solidly the State is in control in India and how deeply stabilizing is the role of our elites. Delhi, a city state of 10 million people was effortlessly turned into a fortress by 60,000 security personnel. It worked without a hitch. Compare this with Paris, where even his delegation may have had difficulty in getting a cab back home on arrival, because taxi drivers were on strike against the ubiquitous Uber’s entry into France. If only, the President must have thought, I had more Indians in France, things would work better.

Illusions are the reality

Second, he brooded over the new Indian Rope Trick by which diversity and tradition are kept alive as a fond memory- a static picture in the head- whilst the real life incentives are all to become part of a national mainstream. The colorful floats, the folk dancers and the serried rows of soldiers- all marching in age old regimental silos in a manner reminiscent of 19th century India- all serve to highlight that they have transcended traditional cleavages. That their nationalism is not about one dress; one food; one drink, one language. It is something deeper and visceral. The President shook his head. Such flippant, multi leveled, varied allegiances to social norms would never do in France, where one culture is the leitmotiv of nationalism.

Third, President Hollande mulled over the resilience of the feudal order in India, albeit mutated away from ancient entitlements to merit based access to State resources, with family and clan networks, patrimony and inherited wealth as the currency of convening power. Quite like Africa he must have thought.

He smiled at the contrast between the muffler clad, “peoples”, Chief Minister of Delhi, Arvind Kejriwal, with his socks insolently peeking through his open sandals loping around to be noticed at the Indian Presidents party and the haughty power exuded by the powder blue, baby soft, finely embroidered Kashmiri shawl, wrapped around a seated Finance Minister Arun Jaitley, like an impregnable cloak of influence.

Give me some air please

Fourth, he coughed as he felt the the smog and pollution which had literally taken his breath away. Despite the chirpy commentary on Republic Day, which ignored the oppressive mist and spoke joyfully of the bright skies, he could smell the smog through the glass screen and feel one’s throat constricting. Nuclear power, the President thought, is what India needs and the French can provide.

Fifth, the business potential warmed President Hollande’s heart. But could French business, used to high margin deals and troubled with low cash reserves work in the price sensitive Indian markets. Indians worry about the cost of fuel whilst buying a Porsche. How, the President, thought, can I make French business nimble and lean like the Chinese or the cash flush Japanese who casually drop down investment in dollops of $10 billion. How to shake the French industrial aristocracy out of their complacence?

Sixth, Hollande reflected over how good Indians were at escaping into selective retention- their movies, our politics, our social norms all pay obeisance to this particular facility. They have retained Gandhijis spectacles-on top of a tractor float, as a symbol but discarded the topi; simplicity; erudition and the open windows of his mind. They air brush reality at will. Goa, it seems from their float, is a paradise of saree clad Indians dancing decorously to undistinguished folk music. But is that is the culture more than 1 million Indians and foreigners go to see over Christmas and New Year! What about the week long carnival of eclectic music; 24X7 partying; food for the mind, soul and spirit and sociable company right there on the redolent beaches! How lucky India is, Hollande thought. If only he could similarly airbrush away France’s social upheavals with just one master stroke of graphics!

The soothing ambience of his air-home away from home, relaxed the President. His beguiling, spaniel eyes drooped in weariness. His horn rimmed, foreign made spectacles slipped off. As he turned over he surrendered himself to the muted, distant roar of a Lion electronically mixed into the soothing, lapping sounds of the waters of a swachh Ganga- must build bridges around water was his last thought. 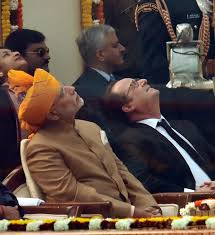