Posted on February 24, 2018 by Sanjeev Ahluwalia 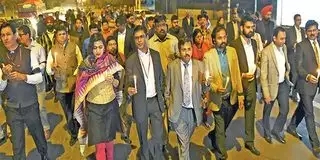 The breakdown of a working relationship between the Aam Aadmi Party (AAP) government of the National Capital Region and its officers is a seminal moment. On February 19, AAP legislators heckled, abused and allegedly assaulted Chief Secretary Anshu Prakash, the Delhi government’s topmost bureaucrat, at the residence of the Chief Minister (CM). Both CM Arvind Kejriwal and deputy chief minister Manish Sisodia were present.

The legislators allege that the chief secretary (CS) used intemperate language in the shouting match between them. Cross-first information reports have been lodged by the two rival parties with the police. Further investigations would reveal the facts.

But the circumstantial evidence favours the chief secretary’s case. He was summoned to the CM’s house for discussions at around midnight. He found a group of 11 legislators and/or partymen — notably all male — assembled. He was made to sit on a sofa, sandwiched between two legislators, who subsequently assaulted him. The bone of contention, according to the CS, was that the legislators were outraged that TV advertisements on the completion of three years of the AAP government in Delhi were not approved in time. The CS avers the advertisements violate the Supreme Court guidelines for government advertisements. The AAP contends that holding up the advertisement, churlishly, is yet another instance of how the Central government uses the office of the lieutenant-governor (L-G) to shackle the state government.

The state government-level staff and officer unions have demonstrated and resorted to work-to-rule tactics against the criminal assault on a government servant while on duty — which attracts severe punishment under the Indian Penal Code. Two legislators — the alleged assailants — have been arrested. The Delhi government is in turmoil.

Beyond the inter-personal behaviour issues, which may have sparked the conflict, a larger problem looms. Are institutional arrangements for governance in Delhi so fraught that they breed conflict between politicians and the hapless bureaucrats, who have to play to the tune of two masters?

Long-term observers would say that no, that is not true. After all, for over two and half decades since 1993 — when elections were first held for the Government of the National Capital Region — this is the first instance of violent conflict.

Delhi is just a “half-state government” — to twist Chetan Bhagat’s evocative phrase. The management of land, the police and the civil service remains with the Union government, represented by the L-G. If the same party is in power at the Centre and in the state government, any conflict can be resolved internally. This safety valve is taken away when different parties are in power.

In the past – guile, maturity and sagacity avoided a breakdown of governance

However, this is hardly the first time that different parties have been in power. In 1993-98 the BJP under Madan Lal Khurana ruled the state, while the Congress under Prime Minister P.V. Narasimha Rao ruled the Union government till 1996. In 1999-2004 the tables were reversed with Prime Minister Atal Behari Vajpayee of the BJP heading the National Democratic Alliance government at the Centre and chief minister Sheila Dikshit, of the Congress, at the state level. So why the open conflict this time?

One difference is, that on the previous occasions, when power was split in Delhi between two parties, both were national parties with mature leaders, well versed and socialised in working within the constitutional constraints of the separation of powers. Put simply, ever since Independence in 1947, a “Lutyens’ political set” has evolved, which often seems to have more in common with each other than their own party brethren from out of town. This is not unlike the Washington “Beltway” syndrome in the United States.

Its different now – the Lutyens consensus is shattered

Since 2014, this “Lutyens’ consensus” lies shattered. Prime Minister Narendra Modi shuns the airy, closeted politics of the Lutyens kind. He draws power directly from the masses. Arvind Kejriwal, chief minister of Delhi, is cast in a similar mould. He exults in being “common” — preferring sweaters to jackets even in Delhi’s winter, with a trademark muffler around his head to keep the wind at bay and is usually clad in sandals rather than shoes. His partymen emulate his casual dress style.

Mr Modi and Mr Kejriwal are both visceral men. Every election is a zero-sum game which must be won. Compromise is akin to defeat. This strategy has worked for both of them. Neither is likely to change.

Delhi has become the battleground for Goliath Modi to slug it out with David Kejriwal. When elephants fight, the bureaucratic grass is bound to get trampled. Anshu Prakash, the incumbent chief secretary, finds himself between a rock and a hard place. A mild-mannered old-school bureaucrat, he has none of the Machiavellian skills needed to become a trusted adviser, simultaneously, to two implacable political adversaries.

Is this sorry state of governance an outlier? Unfortunately, no. Till 1993, Delhi was a Metropolitan Council working under the Union government. In the states, municipalities work under state governments. There is inevitably a potential for conflict, or at the very least neglect (as in Calcutta through the long years of communist rule in West Bengal), if different political parties are in power in the state government and the municipality. Delhi municipalities are currently ruled by the BJP. Their staff have demonstrated in favour of the Chief Secretary. They face symmetric harassment too.  Fuzzy separation of powers and functions and inadequate devolution of finance make local bodies dependent on state governments. This stops cities from becoming the fulcrum of participative democracy and keeps them from becoming vibrant growth centers. 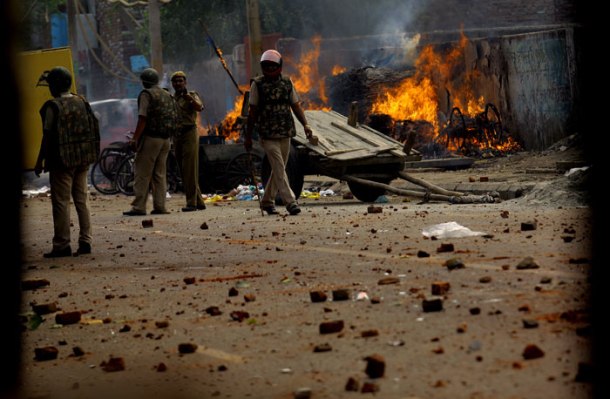 More immediately, in Delhi, we need a truce. The AAP would relish being dismissed by the President of India on the charge of a breakdown in the constitutional machinery. Even as traditional Communist parties remain immersed in obscure, internal ideological battles, it is the AAP which has succeeded in igniting a genuine class war in Delhi, between the “haves” and the “have-nots”. Alas, there are too many of the latter. In this classic struggle, it is the establishment — the bureaucracy and the police — which bear the brunt of public frustration. A dangerous trend, which could be a tipping point, in urban governance.

Adapted from the author’s opinion piece in The Asian Age, February 24, 2018 http://www.asianage.com/opinion/columnists/240218/trouble-in-lutyens-land-babus-as-political-fodder.html